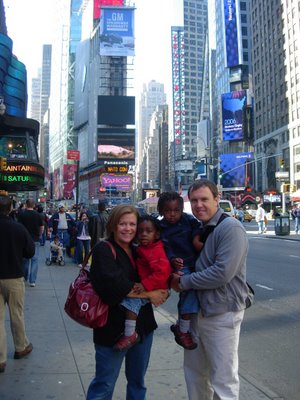 Us in Times Square 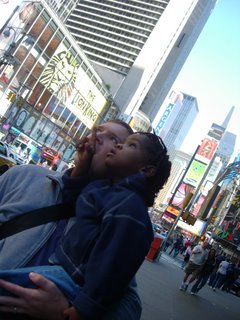 Owen looks at the big buildings

On Sunday, October 8 we went to see the Laurie Berkner Band play NYC!! This was K & O’s first big concert and they rocked out big time! Laurie played all the boys’ favorites– including “Pig on Her Head,” and “We Are the Dinosaurs.” She played a “BLUE GUITAR!!!” (a major highlight for Kyle… the fact that it was *blue*!). Before the concert we spent about an hour walking around Times Square. The boys loved it almost as much as the concert we were there for! Owen, especially, seemed enthralled with the tall buildings. Kyle was most interested in all the neon- and said several times to his brother, “Look Owen! Big lights! Right there!” Owen would respond: “Yeah, Kyle, big lights! Yeah, Kyle!” After the concert we drove to Connecticut for a wedding… and the boys got to party in the hotel with their cousin Sadie (party was chaperoned by Auntie Stina and Uncle Tim — scary thought to think of the day the three of them are partying together without chaperones!). On Monday’s car ride home, K & O slept all the way from Connecticut to Pennsylvania!