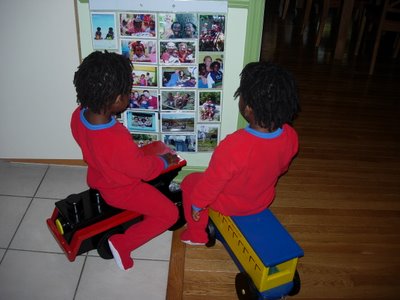 This morning Kyle and Owen woke up just in time to watch one of their favorite things on earth: the recycling truck stop at the end of our driveway! I found them both peering out their bathroom window with huge eyes and racing hearts, soooo excited about this! The recycling truck! At the end of our driveway! What an absolutely fabulous way to start the day! We watched it pick up the neighbor’s recycling and then drive off. The boys ran to tell Braydon– “Papi! Recycling truck!!! Papi! Recycling truck!!!” They were on cloud 9 from that point on, as they played at home in their pajamas before going to daycare. One of Owen’s favorite things to do right now is to play with a color-shape sorting toy. He only sorts by color (never by shape – in fact, this morning I tried hard to get him to sort by shapes instead of colors and I was completely unsuccessful). He takes it very seriously. And, he is very good at it… much better than his brother. Kyle always puts at least some of the pieces on the “wrong” color peg– much to the dismay of Owen, who seems truly disturbed by seeing the results of Kyle’s color-sorting mishaps. Owen regularly fixes Kyle’s wrong-doings by calmly and quietly taking each of the misplaced pieces off and re-doing it “right.” Owen does this sometimes right in the midst of Kyle’s playing with it. Or, sometimes, after Kyle is done, Owen will stop whatever he is doing to re-do the entire thing so that all the colors are re-sorted correctly. This doesn’t seem to phase Kyle in the least. In fact, today, when Owen took over and was “fixing” all of Kyle’s color-sorting failures, Kyle simply got out the toy piano and started playing it and loudly singing his favorite Laurie Berkner Band hit, “We Are the Dinosaurs!” As he was marching and singing and pounding on the piano Owen calmly and quietly re-did the color sorting until it was perfect. I then watched them look at each other, and without any verbal communication whatsoever (no kind of any communication whatsoever- visible to me at least), they both instantaneously ran over to the wooden train, climbed on, and began riding around the kitchen. They told me they were going to “The blue restaurant! Not the orange restaurant mama! Just the blue restaurant!” (later they told me it was actually the “pink restaurant”) Kyle announced they were going to the restaurant to “Eat Pasta!!” And Owen clarified, to be sure I understood this clearly: it was “Just Kyle and Owen. NOT mommy and papi! JUST Kyle and Owen restaurant.” They rode the trains for quite a while- and then took a break – as they do at least once a day – to spend a big chunk of time looking at the photo collage we have on the kitchen wall, and pointing out all of their friends and family in the pictures. 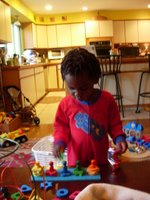 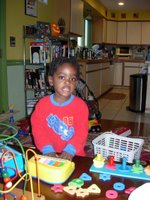 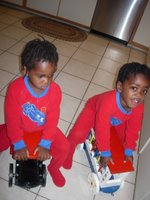