“Or whoever he is” 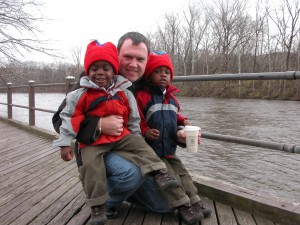 Our little Thursday-Heather-teaches-late-night has quickly developed into a ritual where we go to our local pizza place (affectionately called “Sal’s” after the name of the man who makes pizza, although the place is not called Sal’s).  We love the pizza there, and our family has always been welcomed. In fact, they still have two years of our Christmas cards on their wall (note, there is only one other family on there as well). Which, while could be indicative of something else, is still quite a positive statement.

Our ritual goes like this:  we get in the car, head on down to Sal’s (about 5 min away), park and go in.  We sit in the same booth, order the same beverages (M: water, O: Root Beer, K: Ginger Ale B: draft lager).  Following my lead, all three kids like putting on extra oregano, Parmesan and hot peppers (too funny to see that!).  We hang out and have a nice time and everyone does great.  It probably helps that over the bar there is a little TV playing sports….

Last night when we were leaving, we passed by the pick up area and I accidentally bumped into an older man picking up their pizza.  Not bad, just a little bump.  The man and I excused our selves, but Kyle and Owen really needed to know what happened.

Me:  “Oh, nothing really, I just bumped that man there – sorry again!”

The man:  “I’m sorry too (then to Owen and Kyle) – I just bumped your dad a little.” Then a bit of a pause from him and some embarrassed confusion… “er, well, or whoever he is.”

And off we went.

The thing to me that’s so very interesting about this little interaction is that his first assumption was that I am the boys’ dad.  It was only after he processed for a moment that he thought to question that. Of course, that’s the way it should be – but it’s often the other way around.

People tell us regularly that the boys look like us.  Clearly they don’t mean their skin or facial structure – they mean something less tangible.