The Most Wonderful Time of the Year, Redux

I was going to write a post about how I’m feeling right about now, but then I thought, “Wait a minute! Haven’t I already written that post?!” Sure enough, yes indeed, I’ve already written that post. So, I’ll just say this instead: DITTO TO EVERYTHING I WROTE HERE LAST YEAR RIGHT ABOUT NOW. I’ll only add this: Ugh. It just seems to happen every year, no matter how hard I try to keep it at bay, that flood of frantic frenzy that just overtakes me.

I was really doing well until Monday morning. And then it seemed to just come crashing down on me. Braydon had left before it was even light out to go to an early meeting (terrible timing, but he’s having to leave for work early every day this week, before the kids are even awake, which leaves me to do the whole morning routine solo during a week that I could really use my co-parenting partner). Anyway, things were under control, I had gotten them all up and going, finished making the boys’ lunches, fed them all breakfast, and had everyone bundled up to head out the door. We were about to leave to drop off the boys at school when the phone rang. It was Margie, saying she was sick and could not come in. I had to work hard to not have a panic attack. But I accepted my fate and desperately tried to wrap my mind around what this meant for my day and my week. Words cannot express. Ugh. Anyway, now late, I rushed the bambinos into the car and peeled out of our driveway like a bat out of heck. About three minutes down the road I was pulled over by a cop. Nice. He told me I wasn’t speeding but was “all over the road.” He gave me a verbal warning (no ticket, thank my lucky stars!), but when he told me to “remember” that I have “precious cargo on board” (i.e., my three kids in the back seat), I lost it. It was just the little shove that pushed me over the edge. It was going to happen, the only questions were: when? and what was going to set it off? So, there I was, crying my eyes out – a big ugly sobbing meltdown – right there on the side of the road. Owen kept saying, “Mommy, don’t worry! You’re not going to jail!” and Kyle was reaching forward from the backseat to rub my back, while Meera lost it crying, kicking, and screaming “Mommy! Mommy! WhatsamattaMommy?!!!!” and the nice policeman stood there stoically telling me to “calm down, just calm down ma’am” (nice… that’s just what a woman in that state needs: a man to tell her to “calm down”). I finally collected myself, and continued on to drop off K & O at school. I felt a little better after that (sometimes a good cry really does help). I just wish that I could have done it in the presence of Braydon, or my Mom, or Shalinee, instead of in front of my three young children and a cop. Anyway, it was what it was, and then it was over. And I have absolutely no problem letting my kids and the police see that I’m not made of steel and that I do have a breaking point.

There were about a million things leading up to that meltdown. One of the most notable is the following:

Friday I needed to go to my office to deal with something that could not wait until Monday. Fridays are usually my days with Meera, so it was unusual, but I took her with me to the office. I hadn’t brought her there in quite some time. As we entered my building and headed into the lobby area, Meera looked around the office and said to me, matter of factly, “This is Mommy’s office. This is where Mommy lives.” It was one of those moments where time stands still and you feel like you just swallowed your heart in one gulp and it is now sitting in your throat and you’re about to choke on it and die. Our department coordinator overheard it. I said to her, “It is pretty bad when your two year old thinks that you live at your office.” She –nicely— (she’s super nice) laughed and shrugged it off. She always makes me feel better. The truth is, I know that Meera doesn’t really think I live at the office; I know I have a relatively incredibly flexible and cushy job; I know that, all things considered, I’ve got it real good; I know that I should not complain. But Meera’s comment hit me like a ton of bricks. I took a deep breath and tried to tell myself what I know to be true: It is the end of the semester, the hardest time of year for me, and everyone is just tired, this always happens, and we’ll be alright once we get to the other side of this in a few days, right now we’re just seeing the wear and tear. I’m o.k., Meera’s o.k., we’re all o.k…. and we’ll be o.k…. but it will sure be nice when this week is over and we can move on from here.

While the boys are loving their new school, and absolutely thriving beyond all belief, Meera is suddenly feeling lonely and ready for more in her life. Kyle and Owen have a longer school day now, and Meera is on her own with Margie for most of the day. She tells me daily that she doesn’t want to stay at home, doesn’t want to be with Margie, and doesn’t want to have all of us leave her for school/work. I watch her carefully and I can see the shift in her. My heart tells me that she is not o.k. anymore just being at home while the rest of us go off. And if my gut wasn’t already making it clear, Meera said to me yesterday, point blank: “I want to go to my own school BY MYSELF.” She’s making it pretty dang clear: she, at least according to herself, is done with the staying-at-home-with-the-Nanny-routine. She wants more. She wants girlfriends to play with. She wants out of the house. And so, like every stage so far with Meera, she’s pushing the envelope long before we would choose for it to be pushed (can’t she just stay home happily until she starts kindergarten at age five?????). But this, after all, is how our girl rolls. She is sweet and gentle and quiet (at least relative to her brothers), but she has a good track record of letting her needs be known. And so, now, we’re waiting to see if this is just an end-of-the-semester-sick-of-everything-and-everyone phase (a phase that all five of us J-Ms know all too well), or if this is for real. If it is for real, there are all sorts of ramifications. For now, we’re trying to stay tuned in to our daughter, and just giving it a bit to see how it unfolds. Another UGH.

In the meantime, while the end-of-semester-and-creating-Christmas dust is swirling like crazy around us, and I –especially I—am just longing, and so looking forward to, the moment when that dust settles (cue Hallelujah Chorus), we continue to charge forward with valiant attempts to breathe deeply during this, The Most Wonderful Time Of The Year. Ugh.

P.S. One thing is for certain, I can easily keep it all in perspective by reminding myself that while this is a tough time it is waaaaay less tough than it was a few years ago when I needed to strap 18-month-old-K&O in their high chairs and feed them popsicles just in order to steal five minutes to get something – anything! – done. Wow, it is so much easier now!!!!!!!!!!! 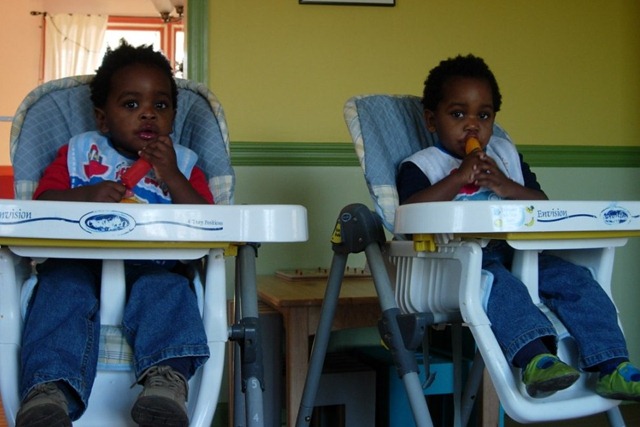