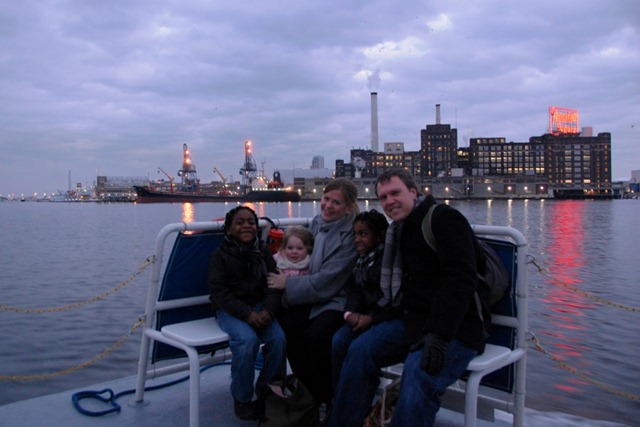 We can completely understand why they call it “Charm City.” Baltimore charms us every time! There is no city that we love more than Baltimore for a weekend family getaway. And so, when talking over what we should do to celebrate our family’s 6th Adoption Day, it was no surprise when K & O pushed hard for Baltimore. And this year, for the first time, we (mainly K & O), decided that Meera was old enough to join us for the Adoption Day Celebration (for the past two years MorMor has graciously taken care of Meera for a day so that the Original Four J-Ms could do NYC daytrips). And so, this past weekend, the three J-M bambinos and their parents went to Baltimore to celebrate our 6th Adoption Day! It brought back a lot of great memories for Braydon and I because exactly five years ago we celebrated our 1st Adoption Day with a weekend in Baltimore (Kyle and Owen were 18 months old at the time).

Two truths about City-Travel-with-Young-Kids should be noted here:

1) Truth #1: It is tough stuff to travel anywhere with three kids, and cities are especially tough (especially for families who don’t permanently reside in a city and aren’t completely accustomed to hanging out in one). Anyone who has ever done city travel with kids knows this. Even though we pretty much consider ourselves Masters-of-Traveling-with-Young-Kids at this point (no doubt we’ve figured out all the tricks in the book), and even though our kids are great travelers, it is still never easy, and it is still always exhausting. Nonetheless, it is a real break from our daily grind (which we totally appreciate), and in all honesty, we truly find it fun to spend time together as a family in this way (I know, I know, lots of people think we’re crazy for this, but really we do find it honest-to-goodness-fun). We set our expectations real low (that’s the most important key right there), we build in lots of down time (second most important key), we make sure that the place at which we’re staying has a pool (third most important key), and we only do road trips with our portable DVD player in the car (fourth most important key *see p.s. at end of post*). We do all that and then we come out on the other side feeling like it was a MAJOR smooth-and-shining-success as long as there are no major crises or catastrophes.

2) Truth #2: Much more than half the fun of City-Travel-with-Young-Kids  is simply the city slicker stuff that our three country bumpkins don’t normally get to do. Oh, the big city! Oh, the fun of it all! And the biggest thing that we’ve learned through our travelling with kids is this: the only way to truly enjoy a trip with little ones is to plan to allow the amplest of time for the simplest of pleasures. Because… 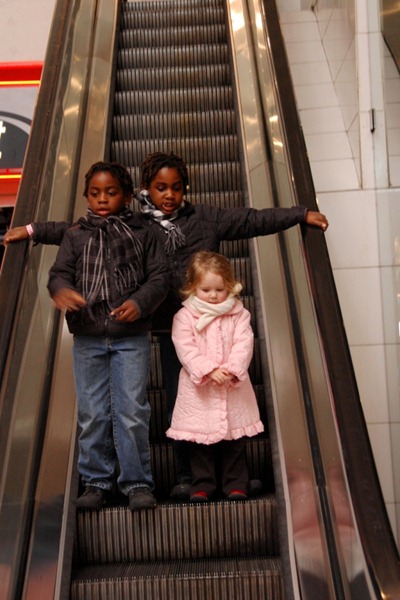 …and in elevators! (and in watching them on them!)… 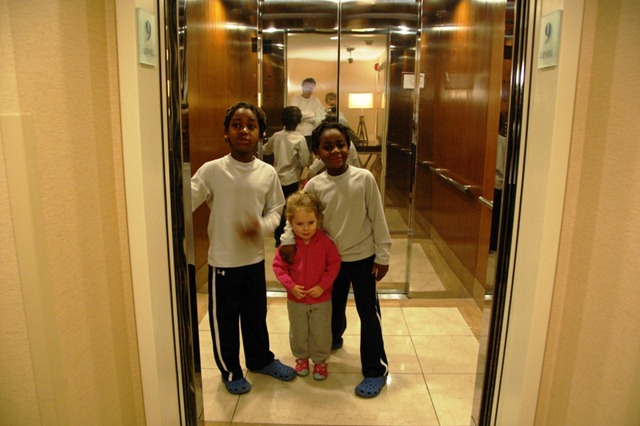 …and in – the crème de la crème of big city excitement – revolving doors! 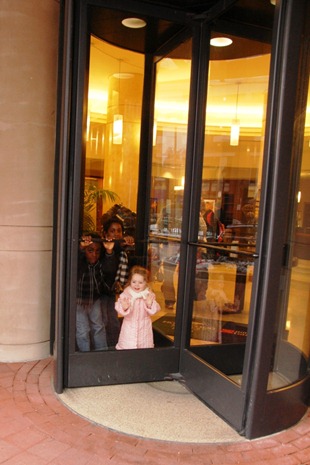 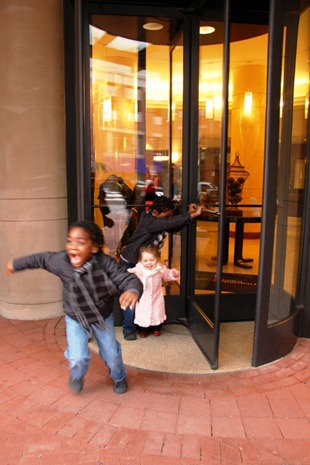 Oh the fun we had! Here are the three in the hotel room on Saturday morning, before heading out for the day: 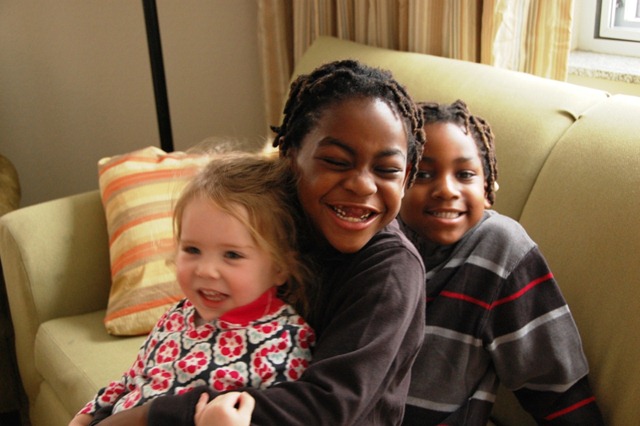 We spent a big chunk of our day Saturday at The Maryland Science Center. We had been there before with K & O. The place is amazing. It is like a Children’s Museum, only even better because it is a real Science Museum. All three bambinos absolutely loved it, and could have spent days there. 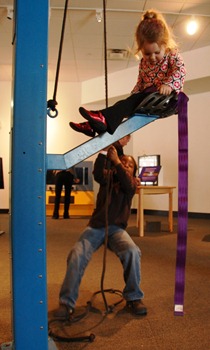 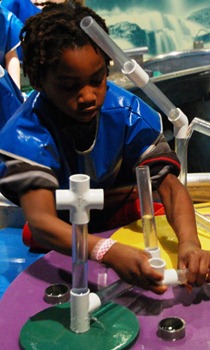 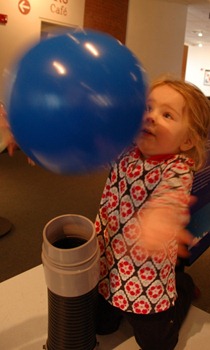 And then we had the treat of seeing the Imax film Michael Jordan to the Max. I had known about this film, and had bought tickets for it in advance, knowing that K & O would love it. It was awesome, and lived up to all of my expectations. The boys loved it. A real highlight of the weekend for us all. 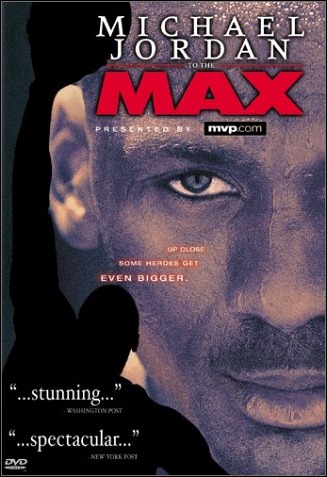 Another major highlight of the weekend: feeding seagulls at the Inner Harbor. (K & O have a history with feeding seagulls, which started three years ago during a trip to Sand Key, Florida.) They called this “The Seagull Adoption Day Party” and oh what a party it was! 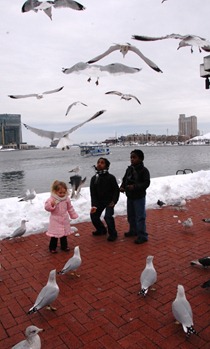 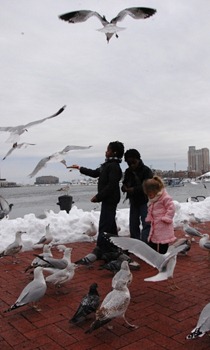 Back at the hotel, we had our own party too. With take-out cheesecake (K & O’s favorite dessert) from The Cheesecake Factory. 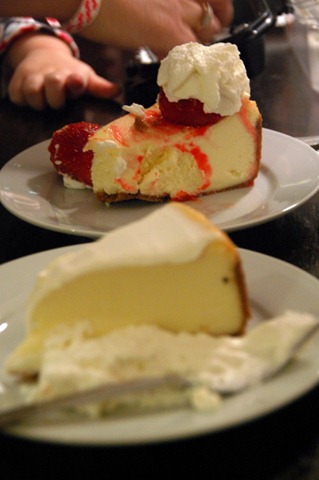 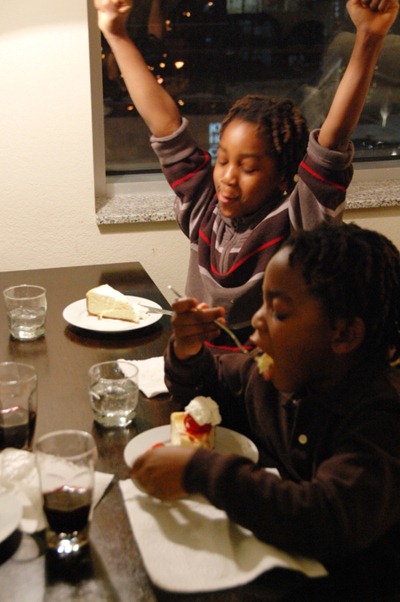 This is the view we had from our hotel windows while we were eating our cheesecake. Doesn’t get much better than that! 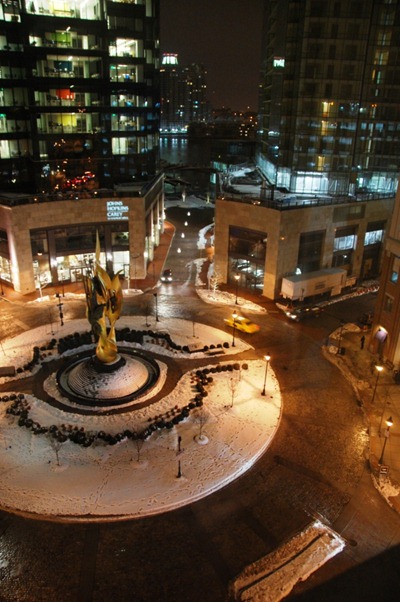 And then there was the pool! 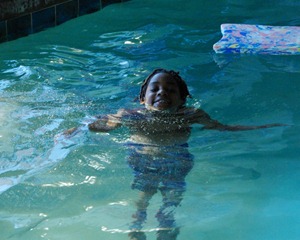 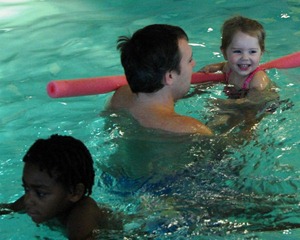 And the chance to ride a “Jumbo Bus!” (a huge thrill for all three bambinos). 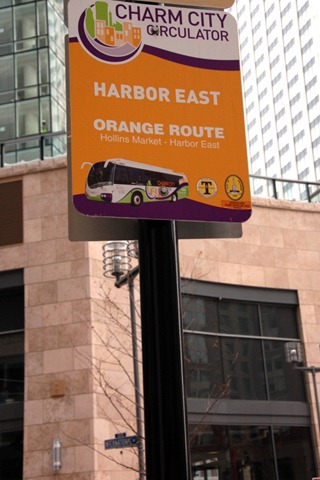 And the Water Taxi (mega thrill) — (and mega cold too… Baltimore Water Taxi. In January. At dusk. But it had to be done.) 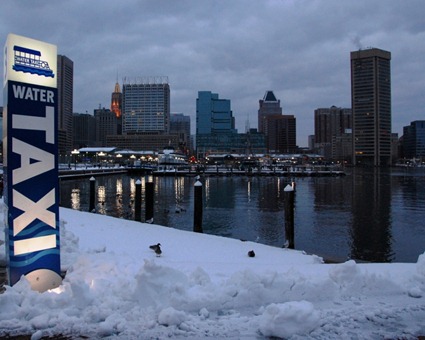 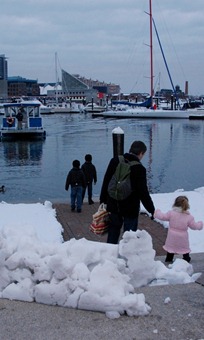 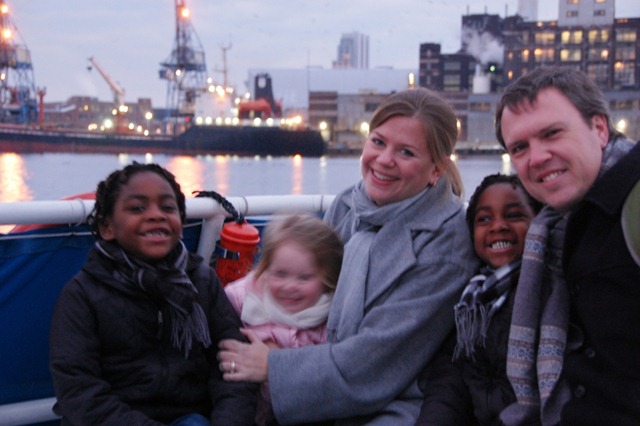 And there was the never-ever-gets-old Throwing-Of-Things-Into-The-Water. In this case it was chunks of snow and ice into the frosty harbor. It doesn’t matter, they love it. 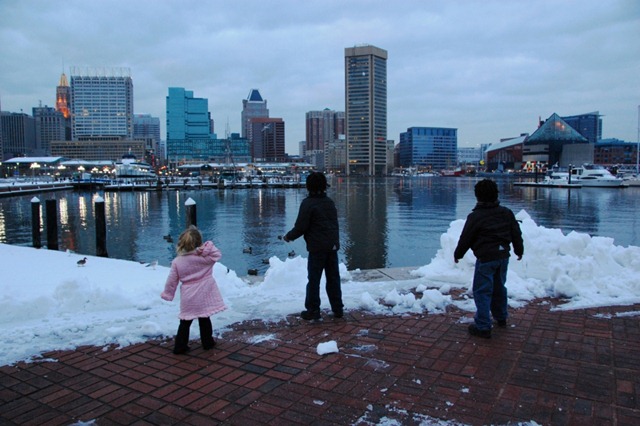 And, in and amongst all the other moments (good, bad, stellar, and not-so-stellar moments), there were some sweet moments that are really the glue that hold it all together and make it all worth it. At one point, just in the midst of everything, I spotted Owen and Meera holding hands looking out together at the harbor, not speaking just smiling. I happened to be able to snap a photo of it, but of course the photo doesn’t do it justice. In the cold January city, there they were in this tender moment. It is stuff like this that makes my heart explode. This is the stuff that makes all the energy that I pour into these sorts of things (the planning, prepping, packing, pure-exhaustion that is a necessary part of the way I am parenting) worth it. Worth every bit of it. I saw this sight and thought, “Yes, that’s right, Happy Adoption Day!” 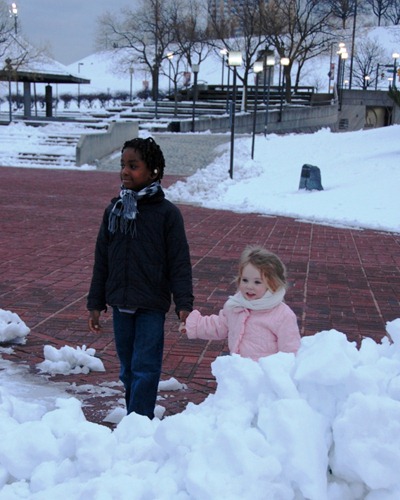 Don’t get me wrong, moments like this were nice too: 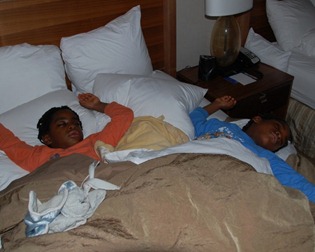 Because it is also really nice when they are all sound asleep in hotel beds (! ha!), and Braydon and I are in the other room of the suite, eating the kind of take-out we can’t easily get at home, and drinking wine, and talking with devotion to nothing but the moment together. That, alone, honestly, would have been worth the trip to Charm City.

But who am I kidding? Even just watching our three crazy kids walking-skipping-running-dancing the city streets would have been worth the trip to Charm City. A great time was had by all. 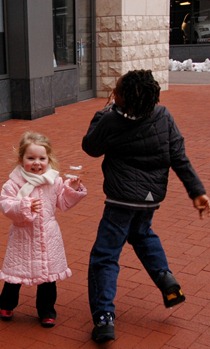 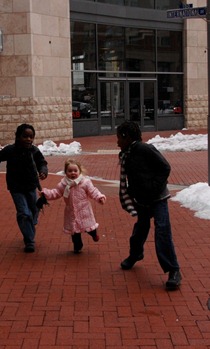 It was a Happy Adoption Day Celebration for us five. As it should be.

On Sunday morning, as we were walking through the hotel to go to the pool for one last swim, we passed a group of people walking the other way in the lobby. K, O, and M were all skipping along, smiling hugely, excited to go swimming, and chattering away to everyone they saw, as usual. (I’m the first to admit, they are ridiculously chipper and friendly.) As we passed the group in the lobby our three all said stuff like “Good Morning!” and “Have a great day!” and “We’re going swimming!” Etc. They all responded with smiles and nice replies. And as we walked past them (this whole interaction lasted just a brief second), I heard one of them say to the others: “That was the happy family that we saw yesterday.” It really struck me. It was a brief glimpse into how we were being perceived there. Not “The Adoptive Family,” or “The Multi-Racial Family,” or “The Weird Family.” But “The Happy Family.” It was a really great moment for me. As the Matriarch of this little “Happy Family” it made me proud.

Oh, and seriously?!… I don’t think it is possible that there are two happier boys on the entire planet than these two. I’m not kidding. I mean, Meera is happy too. Ridiculously so. But Kyle and Owen? Seriously, the happiest boys ever. This weekend I was once again reminded that my sons are not the easiest, not the calmest, not the smoothest-around-the-edges, no. But happiest? Yes. They have got to be the happiest kids on earth. And that kind of happy can’t help but rub off. And I’ll take that over all the other stuff any day of the week. 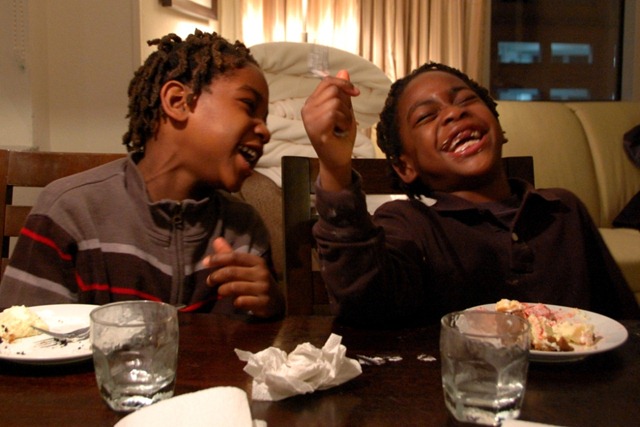 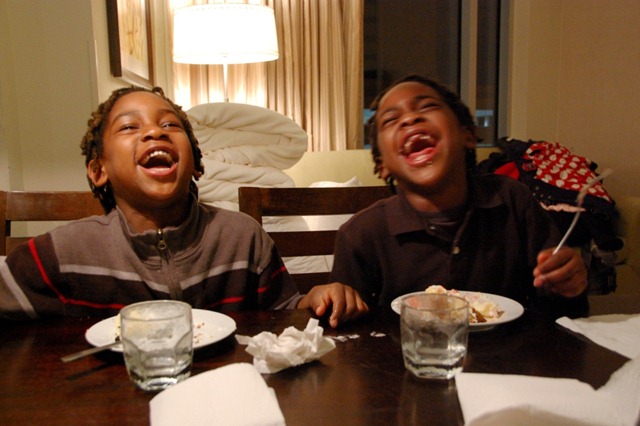 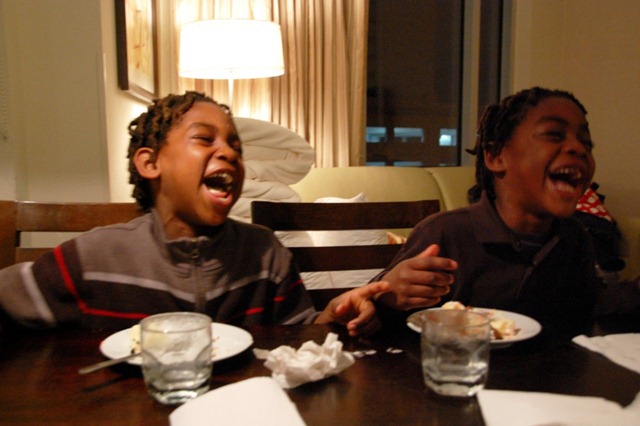 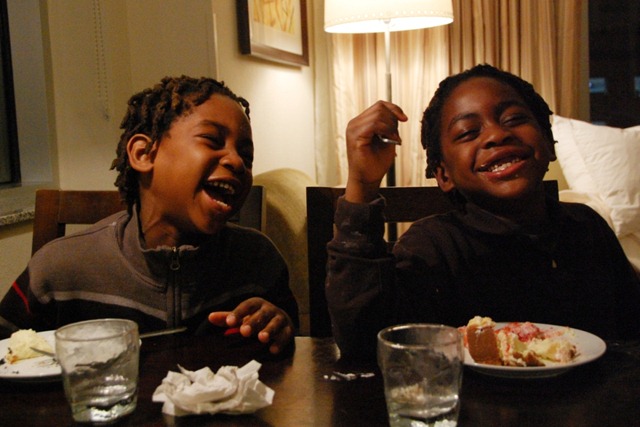 P.S. Random side-note: Loyal readers may remember that a year ago, for our 5th Adoption Day, we took K & O to see The Lion King on Broadway. You may also remember that they then became obsessed with The Lion King. And that Meera too became obsessed with The Lion King (even though she had absolutely no clue whatsoever what it was). She was even the Lion King (or “Li Li Ti” as she called it) for Halloween. This obsession on the part of all three bambinos has lasted the entire year. I don’t think a day has gone by that we haven’t heard or seen something from the three of them in regards to The Lion King. Well, we held out for entire year… and for the road trip to Baltimore we gave them none other than… the Disney Lion King movie on DVD. It has sparked a revival of newfound interest in The Lion King and they’ve watched it every day since. Long live The Lion King!