It is in the Stringing Together of Moments 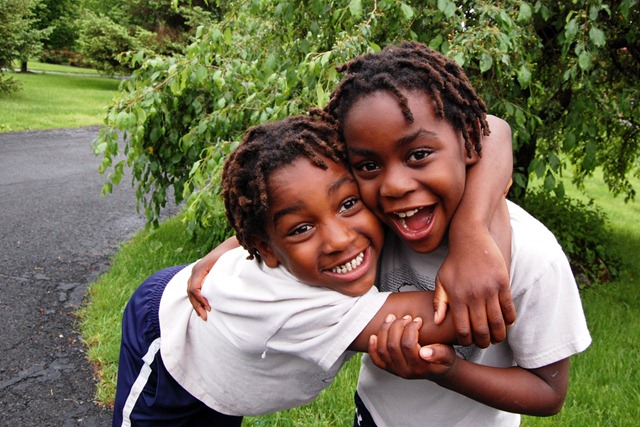 I just finished an hour-long stint of supervising the boys’ writing of their birthday Thank You notes. Words can’t even describe what a mind-numbing, blood-pressure-rising project that was; a true test of patience and self-control, that is for sure. When we finally finished I told them to run outside and put the little stack of neatly sealed and stamped envelopes in the mailbox. I watched them from the window as they skipped down the driveway together – they had evenly divided the envelopes between them and they sang some little ditty at the top of their lungs as they carefully put their parcels of hard work into the mailbox and flipped up the red metal flag. Then Kyle ran fast at Owen, tackled him hard in the grass (both of their heads just barely missing the mailbox post), they both started laughing hysterically and rolling around like two little maniacs… surely creating yet another laundry-room-stain-sticking project for me on their shirts and shorts (the grass and mud stains from these two = endless hours of stain sticking and Oxi spraying for me). I rolled my eyes on the other side of the window and turned away before the scene got any gorier. I’ve found that it is better if I just don’t watch their rough-and-tumble.

Earlier this morning I watched them out the kitchen window, playing in the back yard with Meera. They didn’t know I was watching. I watched Kyle hoist his sister up onto the swing and patiently push her, trying his hardest to teach her how to pump, mostly to no avail whatsoever since she is far from mastering the skill of pumping. Yet he kept on trying, as he has been for weeks now, and surely will continue until he sees her fully master it. I’m sure that when she does finally pump, that in his usual fashion, Kyle will take no credit for this feat and will only be beaming with pride for his sister. I can imagine what he’ll say (things like this have happened many times before): “Can you believe it?! Isn’t she getting so big?! She can even pump now!!!” I’ll remind him of how hard he worked to teach her. He’ll tell me: “She did it though!” and he’ll smile with true joy for her. After the swing, Meera wanted the slide. I watched Owen carefully guide her from behind as she climbed up the ladder, ready for any slip she might make, ready to protect a possible fall. She wanted to roll a ball down the slide to him, and he indulged her in this little game over and over again and again. Even though I know that for him it was truly a bore, I watched him act enthusiastic for his sister, engaging with her in it until she finally lost interest and wanted to come inside. Then he gave her a piggy back ride all the way across the yard, up the deck, and into the house, delivering her to me with a cheerful, “Meera wants to come in now! Bye Mom!” and he took off like a shot to find his brother. I’m sure it took less than a nanosecond for the two of them to find some mischief to get into. Later on I discovered that they had taken a large bucket of whiffel balls and strewn them all over the yard in some sort of crazy game of what they called “war.” At the first drop of the word “war,” I dramatically made some big fuss about how I “hate war” and how “we are for non-violence in this family,” and “war is not the answer,” and “make love not war,” etc., etc., etc. They came back just as dramatically with “ohhh moooooooom!”’s and not just rolling of eyes, but rolling of their whole entire heads and bodies as they showed me with full body language how ridiculously pathetically I misunderstand them, etc., etc., etc. The bantering fun ended quickly when I realized they were covered in mud and that the kitchen floor was now disgustingly muddy and in need of mopping. Ugh. (And I’ve learned the hard way, more than once, not to even think about letting them mop!)

Mid-morning, as we got ready to head out for a bike ride, the volume in the house was way, way high. The boys were in their room, supposedly getting dressed, but actually doing only-God-knows-what, and causing such a raucous that I thought I was going to lose my mind. Next door in Meera’s room, trying to wrangle her into an outfit that wasn’t a dress, I thought to myself ‘How can two children make so much noise?’ This is a thought that I probably have, on average, about 100 times a day. As I scurried around the house getting everything ready to head out (picnic packed; water bottles filled; blankets and backpacks; bag of tricks to keep Meera occupied; etc., etc., etc.), I was, as usual, seriously questioning whether this was all worth it just to go on a little biking outing. Somehow (miraculously!) the boys managed to get themselves dressed (after me yelling at them about a dozen times to “cut it out and GET DRESSED NOW!!!!!!!!”). We were about to head out the door when out of the blue Owen stops everything, stands still for a moment, looks right at me, and says, “Mommy, you look so cool!” (I was wearing yoga pants and a baseball hat and had not showered). Kyle, not to be outdone, quickly chimed right in: “Yeah, Mom! You look awesome! You are so beautiful!” I reached down to hug the two of them, these little charmers of mine who regularly make me feel like a million bucks even on the worst of bad hair days. Just less than 2 minutes later, driving out of our driveway, they were already driving me nuts with their incessant “I’m hungry!”’s and their unruly rambunctiousness in the car, and their purposeful annoyance of their sister just to see her get all worked up. These two— they drive me absolutely crazy in one moment and spring happy tears to my eyes in the next.

Last night we went to “Arts Night” at their school. The centerpiece of the evening was a series of arts performances put on by each of the classes. Kyle and Owen had been beyond excited about this for the past month as they had been rehearsing their part of the show in school every day. In the past few days, leading up to the big night, they were revved up to the point of driving everyone around them crazy, worked up to a ridiculous extent about their upcoming “show!”, talking non-stop about it to me (“you’re going to love it Mom! You are not going to believe how good it is!”), and unable to focus on anything other than the impending show. By the time they were about to actually be on stage last night, they were ecstatic beyond belief, and I was truly worried as to whether or not they would actually be able to contain themselves enough to do whatever it was that they were going to need to do. As the show was starting, my heart started racing for them and I could feel my palms getting sweaty. From our seats, Meera, Braydon, and I could see Kyle and Owen as they entered with their class and their teacher from a side door. They were standing tall, by far the tallest in their class, dressed in their much-anticipated costumes. Before I could even see their faces I knew that they had collected themselves and were centered— I could tell from their bodies— strong, upright, calm, and ready. And then I saw their eyes. Both of them. Scanning the room, looking for me. They saw me. They saw that I saw them. And for an instant, two instances actually (one with each), I knew all that mattered: that all of their enthusiasm, their pent-up over-the-top excitement, the lead-up of their anxious anticipation… it was all for me. They were thrilled with the crowded auditorium, but the only person who really mattered to them was me. Mama. In that moment I knew it in a way I never had before. They smiled at me and diligently moved into position. For a moment, there, in that room on Arts Night, I knew all that I needed to know about my boys, about me, about my mothering, and about everything that matters at all.

Their class performance was great! The truth is that I got chills watching it because of how extraordinary it was. It was a modern dance performance entitled, “Everyone Needs a Shelter”— an interpretation of a Japanese village, the recent Japanese tsunami, the destruction, and the beginnings of rebuilding (the night was a benefit to raise money for victims of the tsunami). Kyle and Owen’s class had choreographed it with the help of the 7th and 8th graders. As their performance ended my boys stood on the stage, bowing to the grand applause of the audience, I saw it again: the quick scanning of the room to find me. And then the locking of eyes. Mama and son. (times two.) First Owen— he found me again in the room, this time to look for my reaction. His eyes were wide and open, wanting to be filled. And they were filled with what he wanted (needed?): I was smiling huge, it was genuine, and I was clapping like a madwoman, like only a very most proud mother can clap. He saw that I saw and that was all he needed to see. It was brief, just a moment, but I knew the look of satisfaction I could see in him. And then Kyle too. All the cheers in the packed audience, every seat filled and standing room only, but there was only one set of eyes there that really mattered in this way. And it was me. A moment only for a Mama. Yes, papi too, and Meera, and their teacher, the “big kids” that they so seek the approval of, the Headmaster of the school who they adore, the parents of their friends… yes, of course, they all matter. But it was me that they held at the center in that moment. And of all the children in their school and in the world, it was them who I held in my center at that moment too.

And there it is: everyday things fall apart, but the center holds. Mothering these boys is a challenge. By far the biggest challenge I’ve ever taken on in my lifetime for sure. We are bursting at the seams all the time. But in the important moments – the important moments big and small – the center holds. In the glimpses out the window and in the instants on the stage. And so it is; it is in the stringing together of moments.