Last Day of 6 in NYC

It is only ever going to happen once in our lifetimes— the last day of having twin six year olds. It just happens overnight—they have a birthday, and bam!— they are never the age past again. On the last day that Kyle and Owen were six years old, we took them to the Big Apple to go out with a bang. MorMor and MorFar were visiting for the weekend (Friday was Grandparent’s Day at K & O’s school, and Sunday was the big birthday). So, we took full advantage and left Meera with them for the day so that we could do our favorite daytrip – NYC – toddler-free (so much more fun to do NYC toddler-free! and we all appreciated that MorMor and MorFar made this possible!). Braydon and I had planned this in advance, but it was a big surprise for K & O. When they woke up Saturday morning we told them first thing: “Get dressed! We’re going to New York City!” They were ecstatic. First question from them: “Are we eating at the dumpling restaurant?” “ABSOLUTELY we are! We wouldn’t do NYC any other way!” And we were off and running by 7:20am!

First stop (after a Dunkin’ Donuts pick-up on the highway, of course)—the train station in Summit NJ. Where we waited for the boys’ first real train ride (‘real’ meaning not a touristy/cog railway/kiddy-train-type thing –which they’ve done before—but an honest-to-goodness commuter rail)— whoooopie! the boys were ecstatic about this! A REAL TRAIN! Here they are, early Saturday morning, waiting for the train~~ 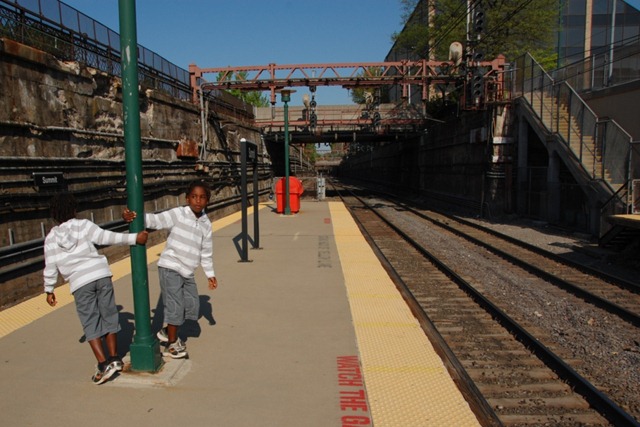 And here they are on their first real train ride. Icing on the cake: it turned out to be a double-decker train, and we got seats on the top floor! The hour-long ride felt like about 10 minutes— they were so enthralled the entire time~~ 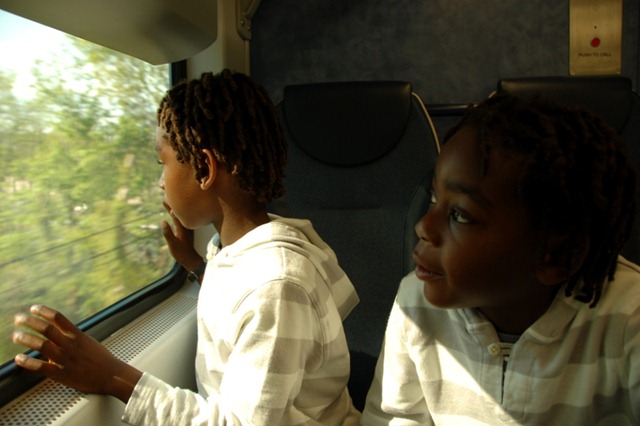 We got off the train at Penn Station. There is nothing like walking up the stairs from below ground and entering the street to the hustle and bustle and frenetic frenzied energy of NYC. It feels like magic—you get on in your plain-jane-neck-of-the-woods and— Abracadabra!—  you get off in a whole other world. Braydon and I love it. And our boys’ wide-eyes and pure-zest-for-every-bit-of-it just makes it all the more magical. We walked the couple of blocks to the Empire State Building. Tallest building in NYC. And we had tickets in hand to go to the top! K & O could hardly believe it!

And there it was. A view worth the ticket price to get to the 86th floor. It was a beautiful sunny day. We could see forever. I loved looking at my boys looking at the world on the last day of their 6-year-old year. To me, this picture just screams it: “The world is your oyster boys! So slurp it right up and enjoy every bit of it!” 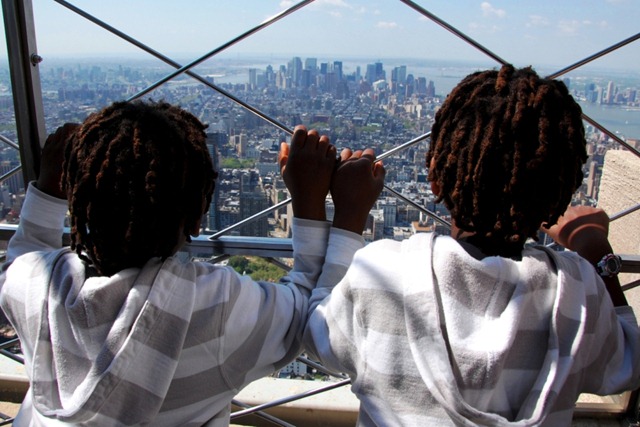 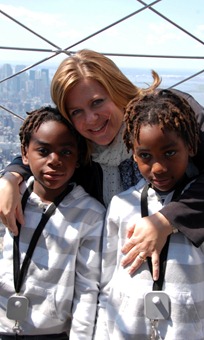 After a quick cab ride downtown, next up on our agenda was Chinatown. We always make sure to get out of the cab early so that we have plenty of time to meander the streets toward our favorite restaurant. There is absolutely nothing underwhelming about Chinatown. Just so much to see, smell, touch, hear, feel, taste at every nook and cranny. Kyle loves to look at the nick-knacks the street vendors are selling. Owen loves to look at the edibles the street vendors are selling. Fruits and vegetables unidentifiable (but oh so interesting) to us, barbequed whole ducks hanging in shop windows, and the most intriguing: the seafood and shellfish displays. Oh my word, it never gets old. Owen could spend a whole day just looking at the piles of things-from-the-water. Highlight of this portion of the adventure: a huge barrel of frogs he discovered. He could hardly believe it when I told him that they were for eating. He asked if he could touch them. I said no. But he could not resist. 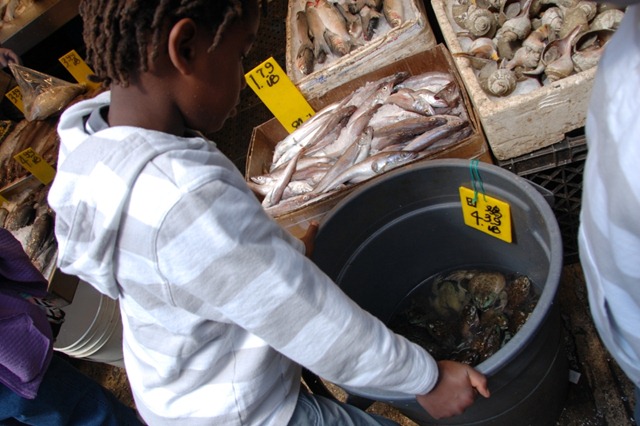 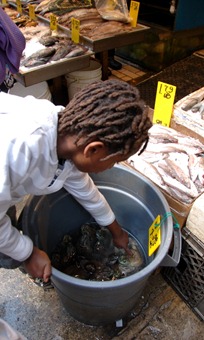 And then there was Joe’s Shanghai. Long-time blog readers know how much we love this place, so I won’t go on and on and on about it. Just: WE LOVE IT. We’ve been taking the boys there since they were babies. Way back then we’d order one order of dumplings. By the time they were three years old we were ordering two orders. The last couple of times it was three orders. This time, on our walk to Joe’s Shanghai, Kyle was already all over us about it: “We better order four orders of dumplings this time!! Remember, last time? Three orders wasn’t enough!” It seemed like a ridiculous amount of dumplings for us to be ordering— one order per person?!— but every single dumping was eaten, plus every morsel of our other two standby’s: Szechuan Green Beans and Shanghai Flat Noodles. This is our perfect lunch. If we were stranded on an island and could only ever have one meal, it would be this one. And we savor every bite of it. (And I have to say, the guys who work there – many of whom recognize our boys from seeing us come in all these years – as well as the clientele who happen to witness it when we show up, don’t hold back in their obvious joy in our boys’ eating of this food with such gusto.) 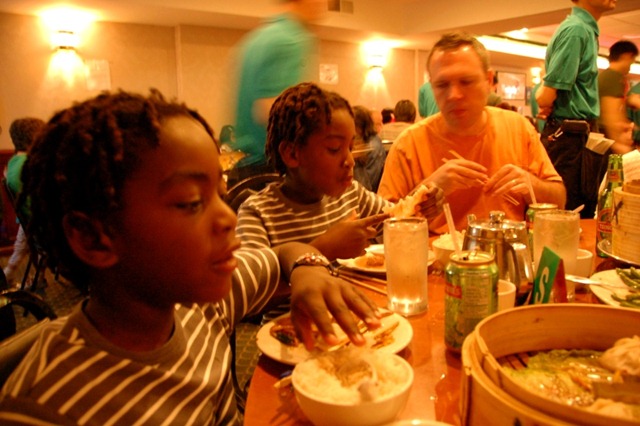 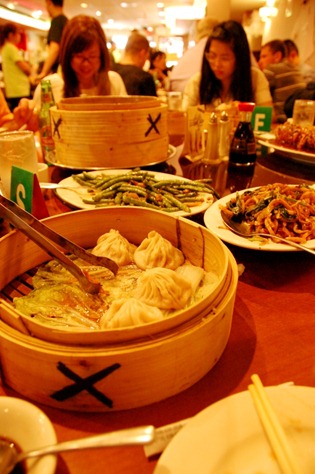 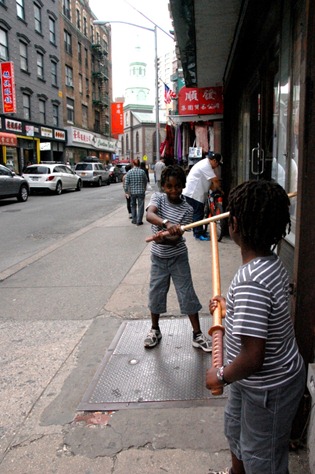 After lunch we told K & O that they could each pick out one thing to take home from the street vendors. They chose matching wooden Chinese swords (and a Chinese fan for Meera). I bartered for a good price for the three and everyone was happy. The boys performed some dramatic sword fighting in the streets of Chinatown while we waited for Braydon to get our dessert: Iced Bubble (Tapioca Ball) Tea… the perfect ending to a lunch in Chinatown.

We were back on the train by mid-afternoon and made it home just in time for the Kentucky Derby and an early bedtime for the bambinos on the eve of the boys’ 7th birthday.

What a treat of a day!