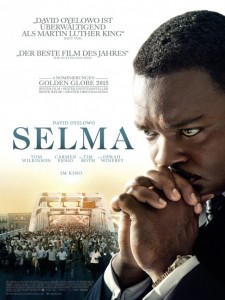 A couple of weeks ago we were at the movie theater (seeing Annie), and before the movie began there was a preview for the movie Selma. Kyle was sitting next to me. As soon as the preview began and I realized what it was, I turned to look at him (just knowing my son, I knew he’d be transfixed). Sure enough, he was transfixed, literally on the edge of his seat for that movie trailer. As soon as the preview was over, he turned to me and whispered in my ear, “I need to see that movie.” Since then he’s been all over me — daily — wanting to see it and asking me to take him. I posted to Facebook about it, asking for insight from people who had seen the film — “Do you think I could bring a 10-year old to this?” For the most part, the response was, “Yes, especially because it is Kyle.” I talked to a couple of friends who had seen it, and who know Kyle, and I decided that I’d bring him. Kyle is a huge Civil War history buff, and is also quite knowledgeable on the Civil Rights Movement. African-American history is his passion. Secretly, I had the idea that I wanted to take him on MLK Jr. Day — I just thought the symbolism of that would not be lost on him.

And it wasn’t. Today was the day. We arranged it so that Braydon took Owen and Meera to see the new Paddington movie, while I took Kyle to see Selma. Kyle was unusually calm and focused and solemn as we went to the movie theater, and he and I got our tickets, then stood in line for popcorn. We got settled in the theater and then the movie started. For the entire two hours, Kyle was deep into it. It was an incredible experience for us — Selma, on MLK Jr. Day, white mom and black son. We went out to dinner afterwards, and then came home to write the following blog post together. We did it in “interview” form to make it easy for us. Here it is~~

H: So, what did you think of the movie?

K: I thought it taught me a lot. I did not know a lot about what happened in Selma. I knew about the bridge and what happened there. I knew it was a massacre. But I didn’t know MLK was not there for the first bridge protest. I thought the movie was really good. I admit, I started getting the shivers. I didn’t know if it was just cold or if I was really really attached to the movie and knowing it just happened a few decades ago. I never got the shivers like that in a movie before.

H: Why did you want to see the movie Selma?

K: I wanted to know a lot more about Martin Luther King Jr., and when those movies come out I really feel like I need to see it.

H: Do you think other people need to see it?

K: Some, but not all. Some kids need to wait a little longer. They need to get a little older and a little more mature. Some people can’t handle seeing someone be really beat like that, or someone being shot, and seeing nothing happened— meaning, they never go to jail – and this is in real life, it was not like a fiction story. So, you really have to be mature enough to know that and be able to handle that.

H: You said that during the movie you were getting “the shivers.” What do you think was the most “shivering” part of the movie for you?

K: Probably when they were starting the march, just about when it was going to start the huge engagement. It was a peaceful protest but they engaged it with violence. I wasn’t like, “oh this is scary!” or “oooh, what’s going to happen?”—it was like excitement. And I knew they were going to win the civil rights, but it still seemed like anything could happen. And knowing it was real life, that’s what gave me the shivers.

H: What was it like for you, as a 10-year old Haitian-American black boy, to see this movie?

H: And then, when you were actually seeing it in action, what was that like for you?

K: I knew it had all happened, but seeing it was like, “My gosh!” It was like, “That’s sad– how people can be like that over just the skin color of someone.” It made it a lot more real.

H: Did you feel uncomfortable watching the movie?

K: I was squirming in my seat a lot. Like, literally. Cringing.

H: Are you glad you saw it?

K: It was just meant to be. When I saw the preview for it, I knew I had to see it. Even if there was violence, which I thought there would be. I just knew, “I need to see this movie.” And that’s how I feel now—like, “Yes, I did need to see that. And I’m glad I did.”

H: What other questions should I ask you?

K: You should ask, “How did you feel seeing something like that? Seeing such a massacre, or seeing the beatings?”

H: So, how did you feel seeing something like that? Seeing such a massacre, or seeing the beatings?

K: I felt like I wanted to do something when I was watching it. I wanted to be in that line, protesting with them. I would have to do a lot of practicing to do running – to run as quick as I can, to retreat from the massacre on the bridge and other places. They had to run for their lives. I’d have to run for my life if it was me. It made me inspired to want to try to help fix this type of stuff. Today it isn’t as bad as back then, but stuff still happens today. Like the shooting in Ferguson, and stuff. And it makes me—well, it makes me — not worried — but I have to be extra careful— more careful than I should need to be. It made me want to do something about that – like nonviolence – and trying to help with the problems now.

H: Anything else you want to say to the people who might read this?

K: I would say, “go see this movie!” But if you don’t think your kid is mature enough, then don’t let them go. Warning – if they are scared of loud noises, watch out because in the beginning something sudden’s going to happen. I’m not telling you what—because you have to see the movie. But that’s just a warning.

H: Ok, so, do you have any questions for me? I asked you all these questions. Do you want to ask me questions now?

K: As a sociology professor, how do you feel seeing that movie?

H: Ok, I’m going to answer this question like this is a real interview– ok? So, here’s my answer–  I was anxious to bring my 10-year old black son to see it. I was nervous for what he’d see, and how he’d feel about it, and process it. But I’m glad I did it. I believe in being as honest as possible with my kids about social issues, and all issues. As a white mother raising black boys, I believe that it is of the highest importance to be truthful and real with them — in as age-appropriate a way as possible. Selma helped Kyle to understand the civil rights movement, the history before it, and our history after it— through to today —- in a way that was different than us just talking about it, or him reading a book about it. It was powerful for him and for me to see the movie. And to see it together was a bonding experience for us as mother and son. I want him to remember that his mom had the guts to take him to see Selma when he was 10 years old. But that’s actually all how I feel about seeing it as a MOM. As a sociologist, here is what I think: I think people today of all ages, including young people, believe that the Civil Rights Movement was won and that it is done. I think we need to understand that this push for justice and equality and humane-treatment-of-all-people is still very much needed now. As a sociologist, I believe that movies like Selma can be powerful and inspirational for all people, including young people. I think everyone should see Selma when they are ready. And some will need to be pushed even before they are “ready” (because some will never really be ready to face reality and see the truth). I think it is ESPECIALLY important for white people to see it. Particularly white YOUTH. So, white parents: Please bring your white kids to see Selma. And then talk about it with your kids.

K: I don’t think I should give you any more questions because we’ll probably be sitting here for hours!!!

H: Ok, well, then, let’s end it with a quote. Can you give us a quote to end this with? A quote from you.

K: “If you want something so bad, you will risk your life for it.” 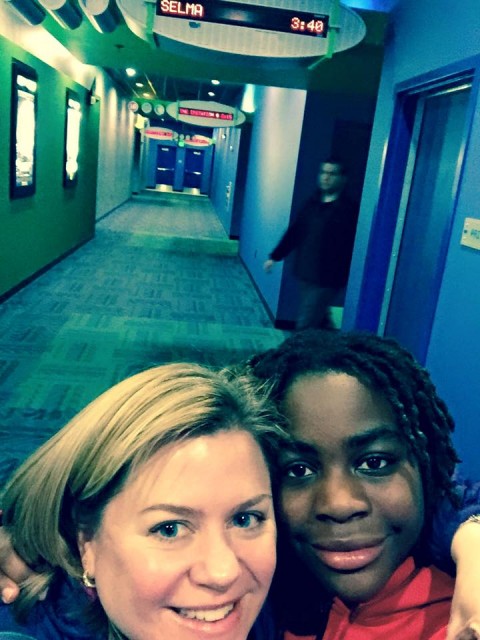