Food from the Beach House: A Lowcountry Feast 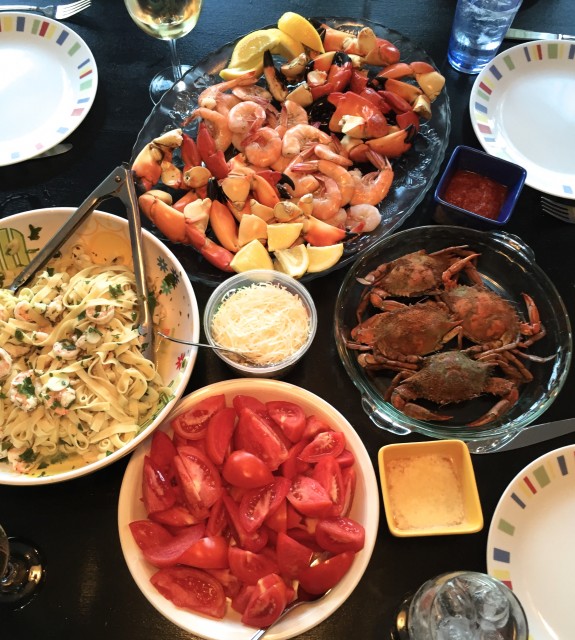 This is not something we do often, and only something we could do while here in South Carolina, but at least a couple of times during our stay we like to put together a Lowcountry Feast. We did this last week for MorMor’s visit.

This is not really a recipe, per se, more like a pulling-together of some of the incredible bounties of the Lowcountry for one amazing supper. Every place mentioned here is within a 10-minute drive from the beach house. I hope that years from now the bambinos will remember meals like this. Here’s the HOW TO straight from Harbor Island:

1. Appetizer: Stop at “The Mainline,” the open-air bait and tackle market on the side of the road, right in the middle of Harbor Island, to buy a bag of boiled peanuts. Dump ’em in a bowl for snacking while everyone takes part in preparing the Lowcountry Feast. Watch out for Braydon and Meera — they’ll eat the whole bag themselves in one sitting.

2. Stop in at Gay Fish company for fresh shrimp and already-steamed stone crab claws. Get there early in the morning, to make sure they don’t sell out of the crab claws (they never sell out of shrimp!). They’ve come to know Owen (he’s become a regular during July), and they take special care of him — they let him pick out his own claws so that he can choose each of the dozen or two crab claws that he wants. Buy a pound of regular shrimp for the scampi, and a pound of large shrimp for peel-and-eat shrimp cocktail. To prepare the shrimp cocktail: these shrimp are too good and too fresh to do anything to them other than steam them. Throw them in a steamer tray over boiling water in a large pot. Let them steam with the top on the pot only for about 3 minutes. Pull them out, and they’re ready to go! Serve the shrimp and crab claws with fresh lemon wedges, cocktail sauce, and melted butter. 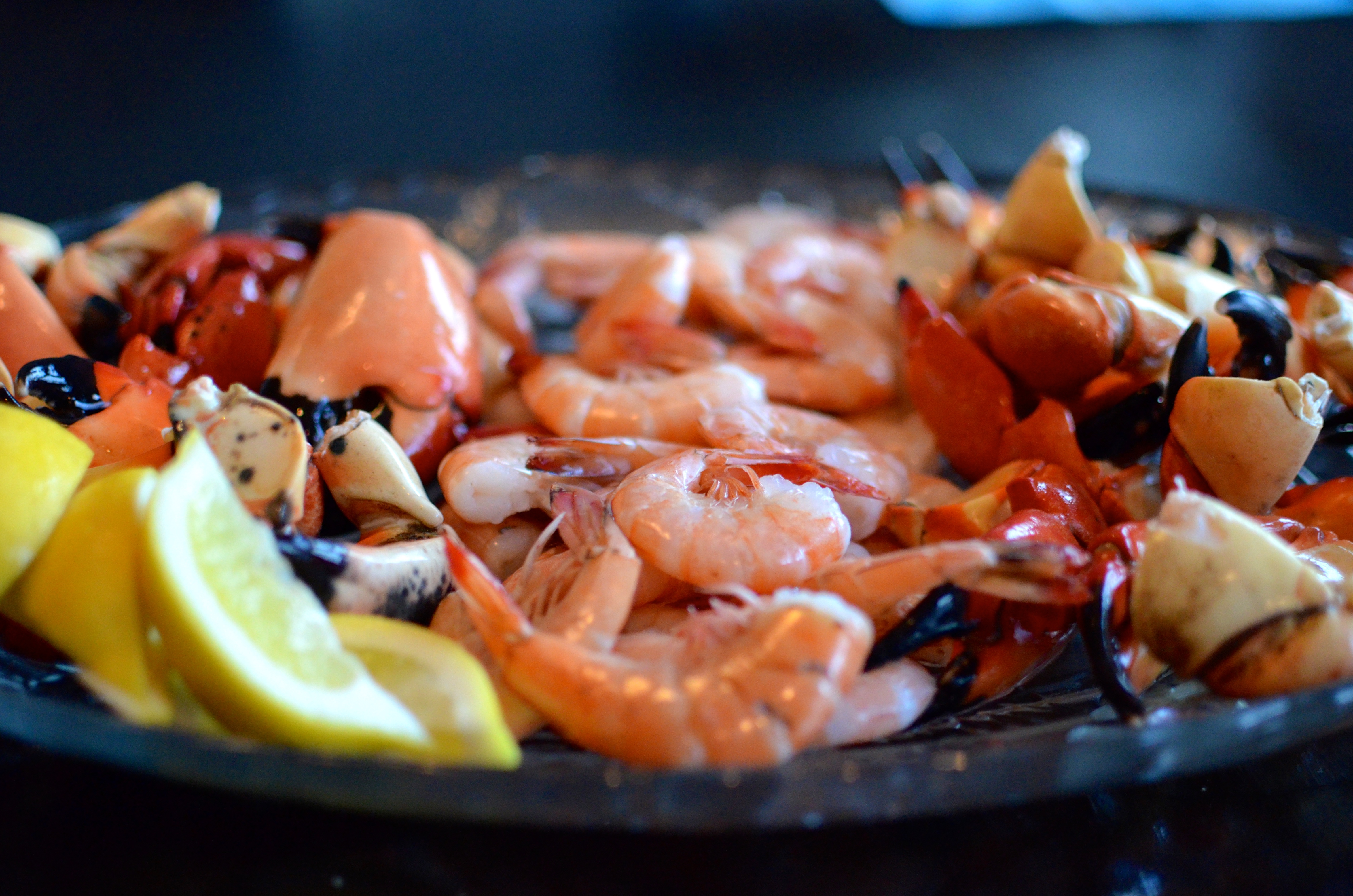 3. See what you caught that day in the crab trap, and hope you have at least a few big blue crabs to bring home. To prepare the blue crabs: scrub them under cold running water to get them as clean as possible (but it will be tough, with them squirming snapping their claws at you and all). Using the same steamer that you just pulled the shrimp out from, drop the crabs in and douse them with a nice layer of Old Bay Seasoning. Cover and let steam for exactly 10 minutes. Pull them out, and they’re ready to eat! 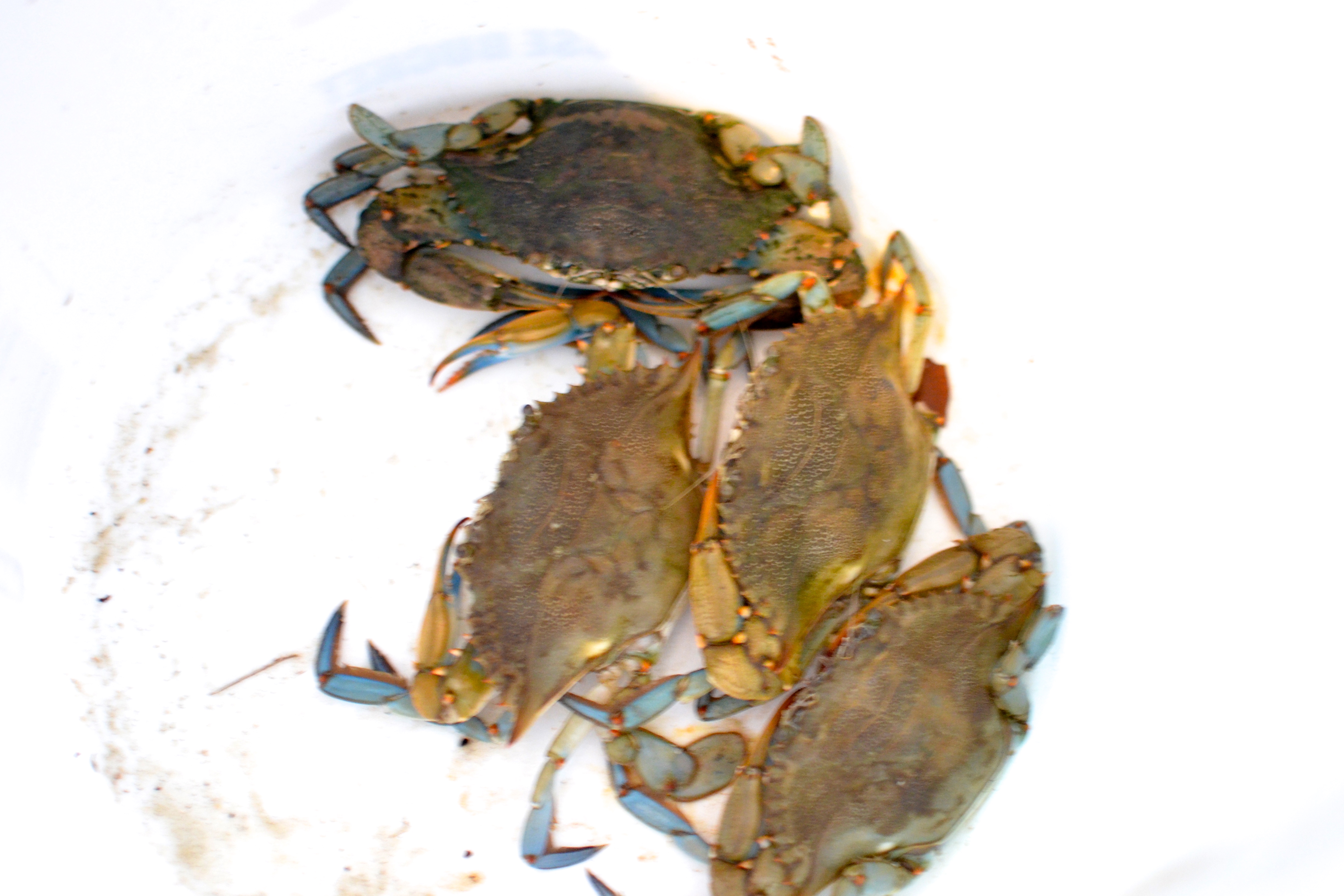 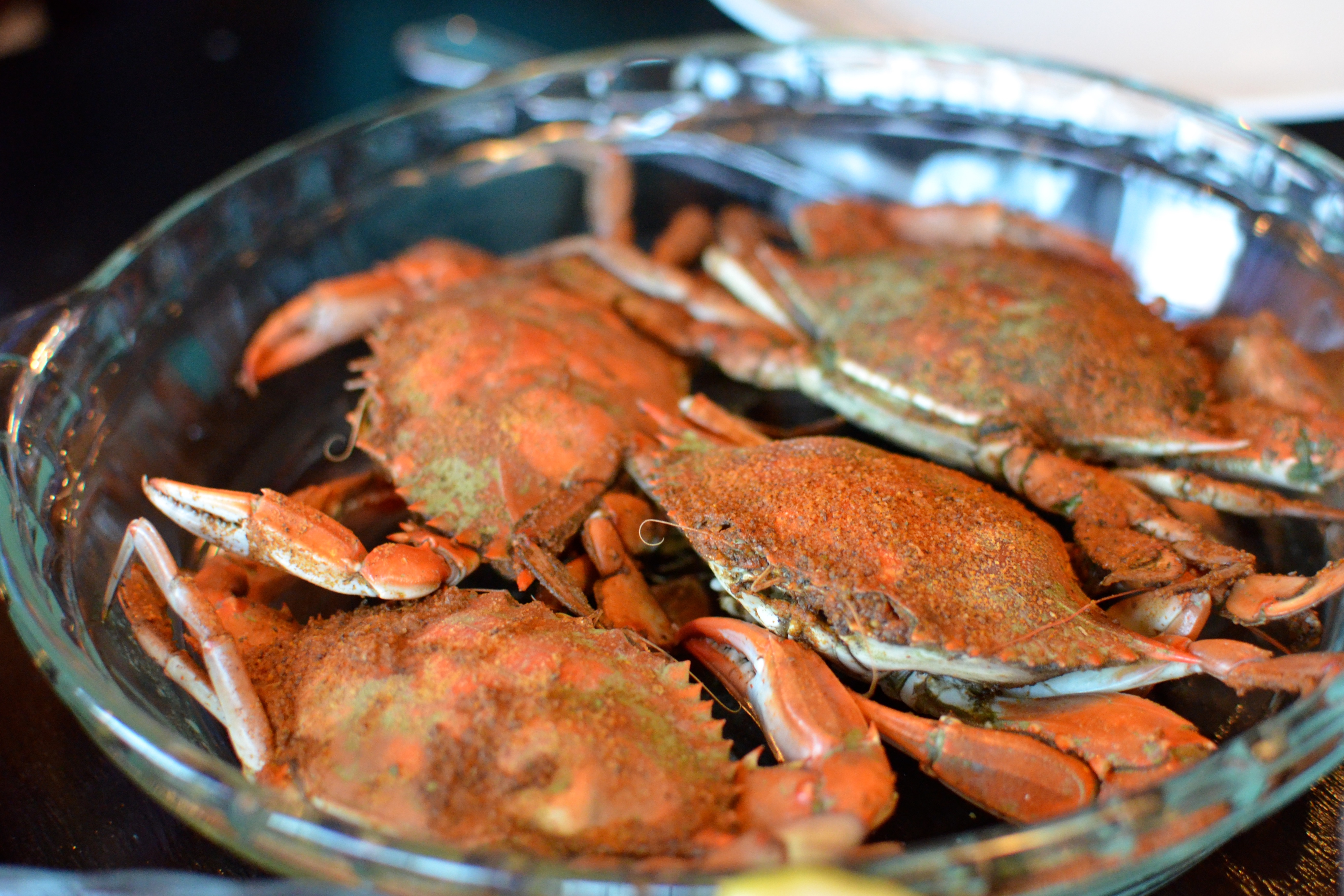 However… this is important: let Dash play with ’em a bit on the kitchen floor before cooking ’em. 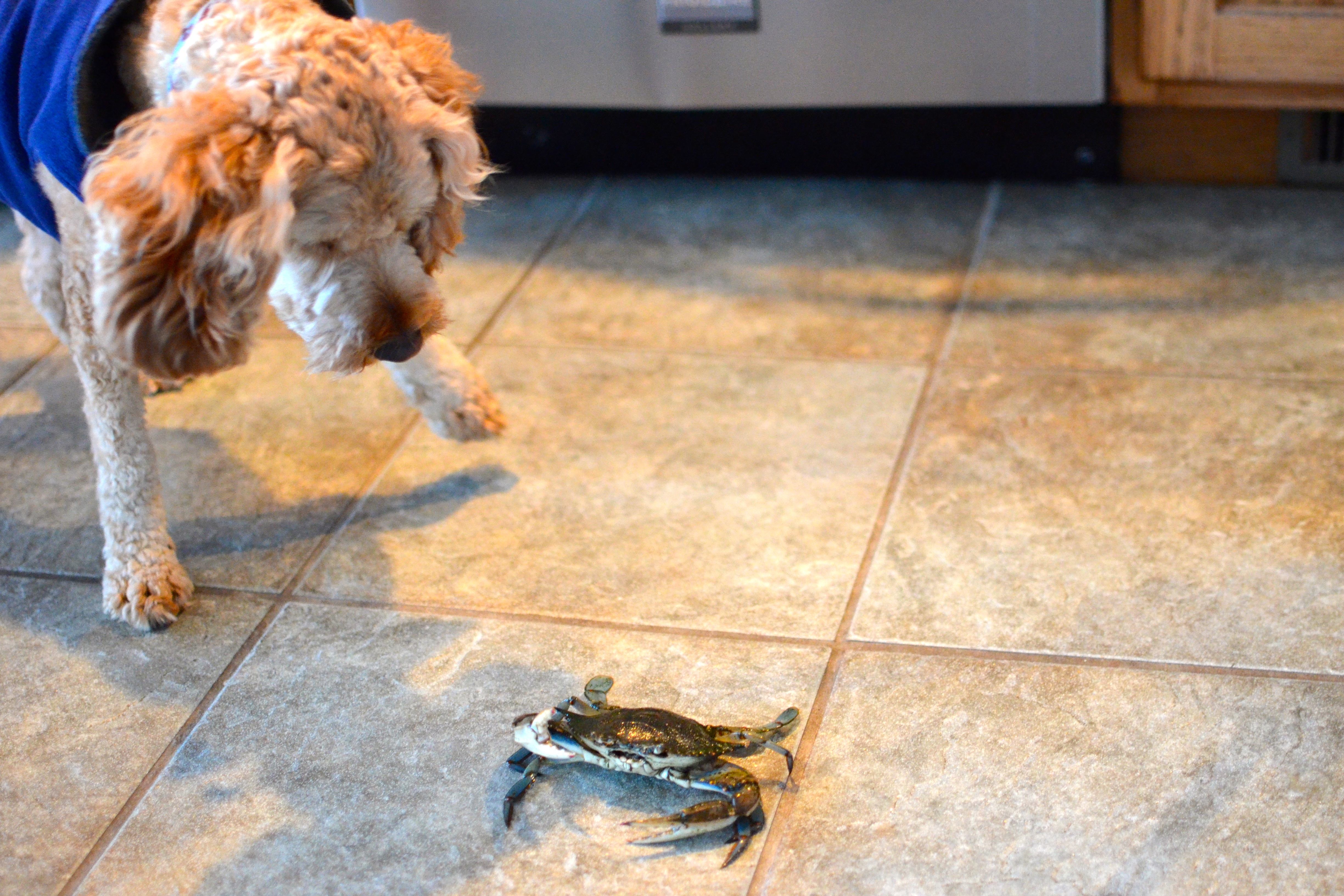 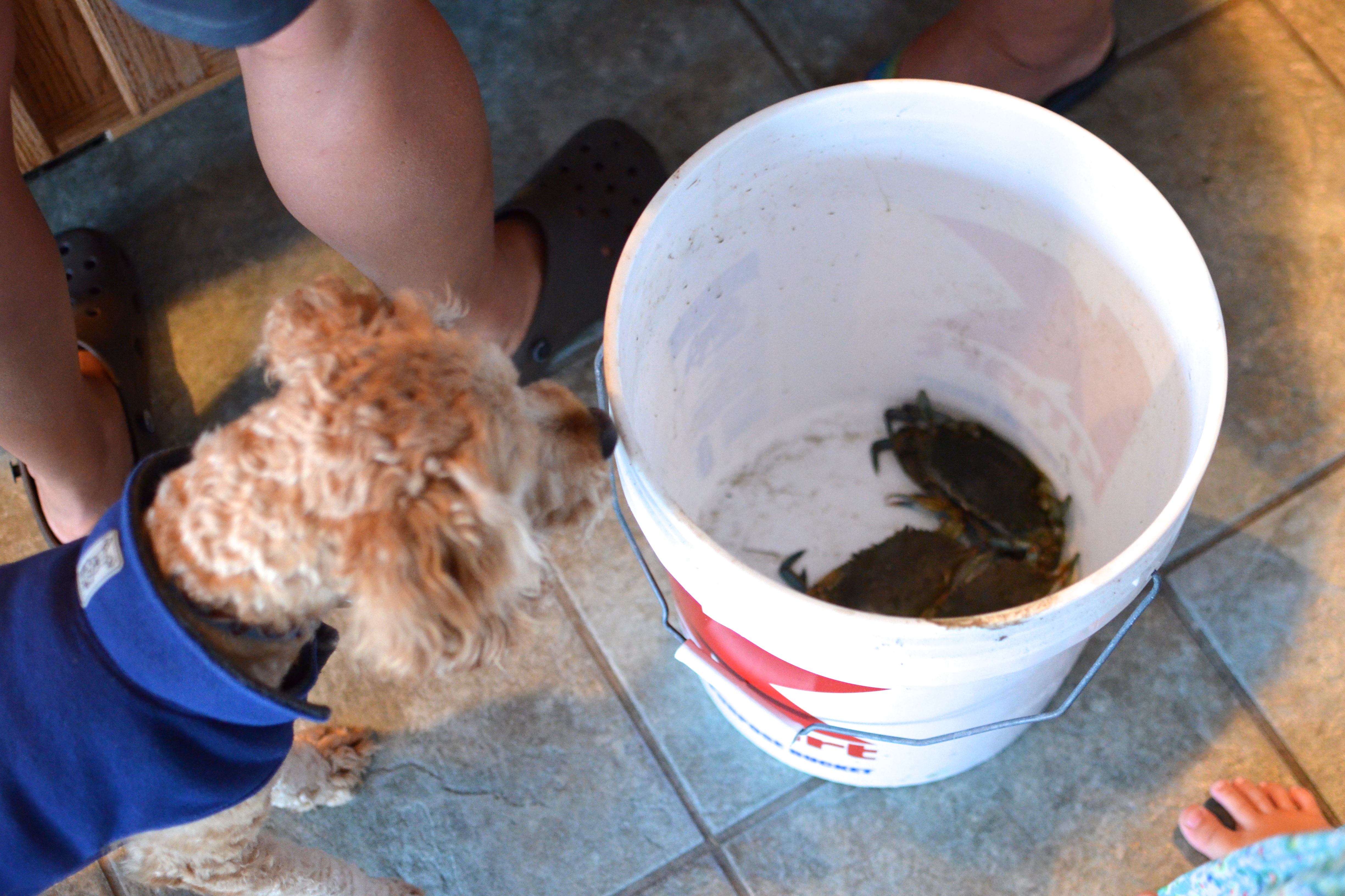 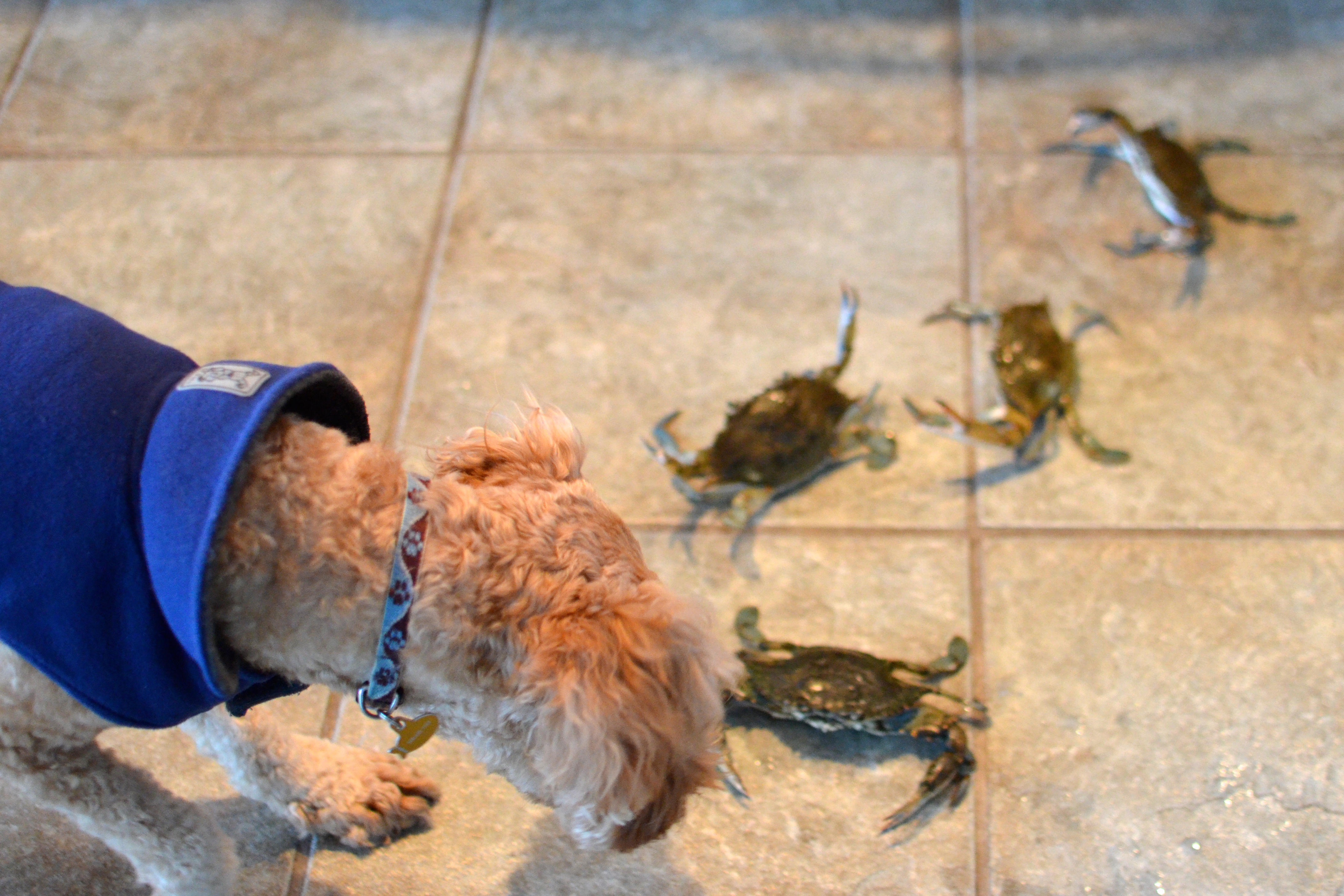 4. Buy some tomatoes at Dempsey Farms. Some people claim that the Sea Island tomatoes are the best tomatoes in the world. I’m not sure about that, but they are so, so, so good. Pick them yourself (Dempsey Farms is a Pick Your Own Tomatoes place), or, if you don’t want to take the time, for a bit more per pound, buy the ones they picked for you. Cut them up, or slice them, and serve just as they are. I like some salad dressing on them, but the bambinos like ’em plain. 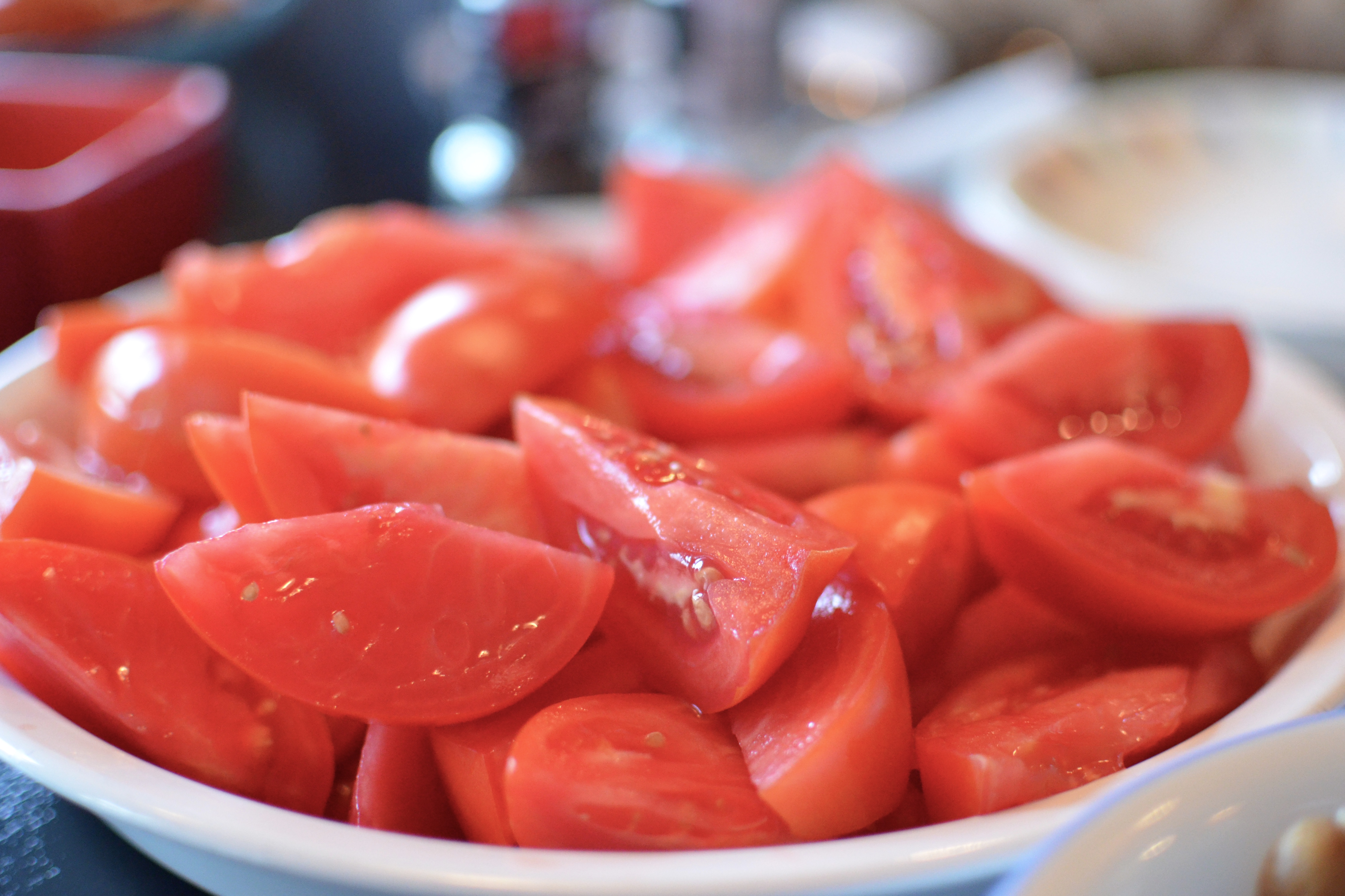 5. Whip up a batch of Shrimp Scampi with that other pound of shrimp from Gay’s. Recipe is here. 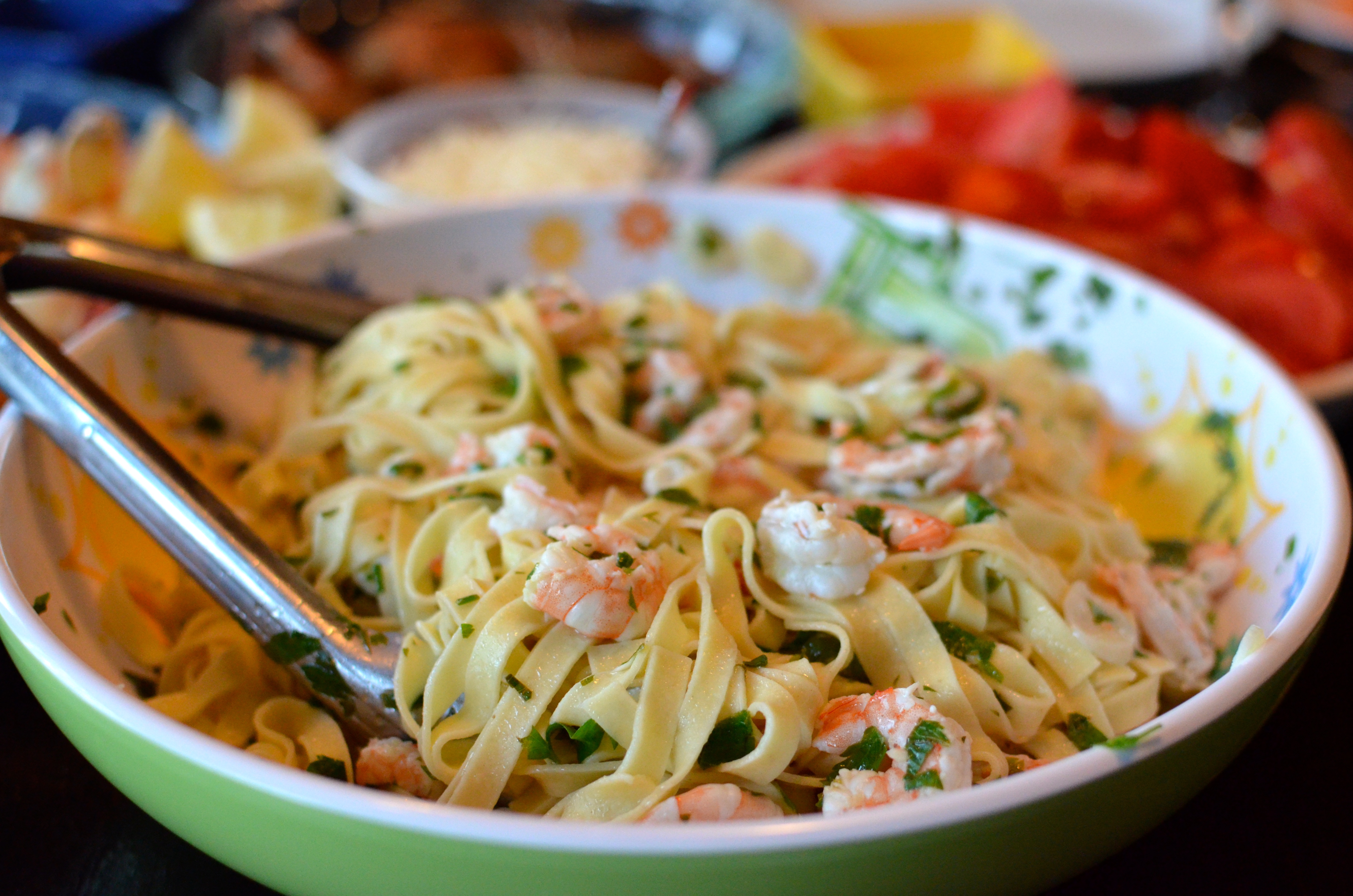 6. Dig in deliriously to this amazing Lowcountry treat-of-a-meal! (Peach Cobbler for dessert — if you’ve been good that day and Mama’s in a good mood — I’ll post about that recipe sometime soon!)