Field Notes from an Adoptive Mother: “Enjoying Your Summer?” 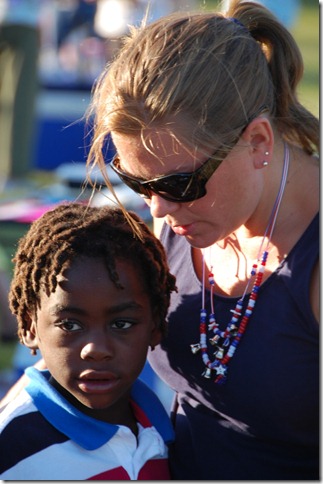 One day recently, at the very tail end of the summer, I took all three kids to McDonalds for lunch as a special treat for behaving (relatively) well while running errands with me that morning. We were there right at noon, in the midst of the lunch rush, and the place was packed. There were three lines leading to three registers that were all jam-packed-full and we were in the middle line. I was holding Meera on my hip and I had Kyle and Owen standing right close with  me (I had threatened them, before we even got out of the car, that if they were to even think about running off into the playspace before I was done ordering our food then we would leave immediately… so they were sticking real close). Upon settling in for the long wait in line, I pretty quickly noticed that a woman in the line to our left was staring at us unabashedly. People always stare at us (in fairness, I should say, "people often stare at us," but in truth, it usually feels like always), so we are accustomed to that, but this woman was going above and beyond. I try to ignore this kind of thing, but she was standing literally less than three feet away from us, just gawking, so it was virtually impossible.  Owen got up on his tippy toes, pulled my head closer to his, and whispered in my ear: "That lady right there is STARING at us." In such situations I tend  to either blow it off entirely, or to try to nip it in the bud by pointedly taking a moment to look right directly at the person, give them a huge big ‘ole smile, and then keep on with our business. This usually does it and the person quickly and awkwardly smiles back (or blatantly doesn’t), and then, either way, feels self-conscious enough to quit staring. So, I nodded at Owen, whispered, "Yeah, I know!" and then did my deliberate ‘kill-’em-with-kindness-mind-your-own-business’-smile at her. With this woman, though, it had the opposite effect, and instead of looking away, in response to my smile she took a step closer to us, looked right down at the boys, and said, "Are you two boys enjoying your summer?"

She seemed like a really nice woman. I get vibes, and I pride myself in having good intuition at reading people. My immediate sense was that she was a well-meaning, sweet person who self-identified as "Liberal" (capital ‘L; she was wearing an organic-cotton-looking t-shirt with a nature print silk-screened onto it and her accessories and shoes  and hair cut were screaming ‘funky’/’hip’/’green’ etc., etc., etc…..  just trust me: she was looking very "I voted-for-Obama-and-I-recycle-and-I-LOVE-DIVERSITY"-ish. Don’t get me wrong: most of the people we associate with are these types, and I myself voted for Obama, recycle, and love diversity too…  this is no slam against her whatsoever). She looked like she was about my mom’s age and reminded me of many people that we know and love. My initial thought was, ‘She’s just trying to be super friendly and act super supportive of our inter-racial adoptive family’…. and honestly, at that point, I was thinking, ‘she’s probably about to tell me that her grandchildren are bi-racial or something.’ This happens sometimes, and as awkward as it can be, I actually like those sorts of interactions with people because –quite frankly– they feel a lot better than some other (less kind) ones, and I’ve come to believe that it is best to just be up front about it all whenever humanly possible. It turned out, though, that this interaction was not going where I thought it was going.

As soon as she said, "Are you two boys enjoying your summer?" Owen looked right up at her and said, "Yes, we are enjoying our summer! Are you enjoying your summer?" She was exuberantly delighted with him and responded right away, "Oh! Why, yes! I am, thank you! What good manners you have talking so nicely with a grown-up!" It was semi-condescending, but I was getting really close to the register at this point and was starting to get distracted by what to order. I then heard her say, "So what have you boys been doing out here?" Out here??? Kyle and Owen were slightly confused, but Owen said, "We’ve been shopping." "Oh," she said, "how nice for you!" (She then looked right at me and winked, and I really started to feel like something was not totally clear here).  Trying to do friendly reciprocation, Kyle  said to her, "So, what have you been doing here?"  "Oh!," she laughed, tossing her head back with delight, "Well, you see, I live here! Just like this nice lady here!" (motioning toward me). At this point the boys were lost in translation  (as was I), and surely all three of our facial expressions showed it. Still, she went on, "It must be nice for you two boys to be out here. How long are you two here for?" At this point the boys were completely disoriented. They looked up at me with bewildered looks. I looked down at them, my mind spinning fast, trying to get a grip on what she was talking about, searching for an understanding as to what was going on. And then it clicked: something that I had not yet encountered and had never really thought of—  but I knew  instantly that I was right— it pounded through my brain— she thinks they are Fresh Air Fund kids.

Ugh. I looked up from them, and across to her. Before I could speak she said to me, "They’re from the city, right? I am such a supporter of these kinds of programs! Kudos to you!!!" I felt my face flush. My mind was rushing. Meera was squirming in my arm. The McDonalds guy at the register was telling me it was my turn to order. Owen and Kyle were looking up at me, completely and totally confused with blank faces. The woman was looking me right in the eyes with her huge dramatically approving smile. And I felt like everyone within ear shot (which was easily a dozen people) were watching and listening to this whole scene unfold.

I looked at the guy at the register and said, as clearly and as loudly as possible, "My two sons will each have a Happy Meal please. My son Kyle wants chicken nuggets, french fries, and chocolate milk. My son Owen wants chicken nuggets, apples, and chocolate milk…." and I proceeded to place the rest of our order. I’m sure my voice was trembling. I know I was breaking out in a sweat. I had no idea how I should be handling the situation. This was one that I hadn’t seen coming.

Out of the corner of my eye I could see that the lady was shocked at the revelation that they were my sons. She was blushing bright red and avoiding any and all eye contact.

While we waited for our order I whispered something to the boys about how she "thought we were from the city" and she was "very confused" or something like that. (They have no idea what the Fresh Air Fund is, nor do they need to learn about it in this context.) And then we were off to playing in the indoor playground and eating Happy Meals. They were entirely unfazed. But then again, they are just barely six. It won’t be long until they ‘get it’ more. And indeed, they are ‘getting it’ more and more all the time.

I watched them in the McDonald’s playspace with a perfect spectrum of earth-tone-colored kids. This particular McDonalds draws a very racially diverse group, and that day — like the other handful of times we’ve been there — it appeared that most skin tones were represented. That is, after all, one of the primary reasons I take us there. The boys made friends fast and a wild game of tag quickly got going. But as I looked around I was reminded that although there were lots of families represented there, even one with a black dad and a white mom and two beautiful bi-racial kids, there was not one other that actually looked like us.

And so it goes, as us, out there in the field of real life.