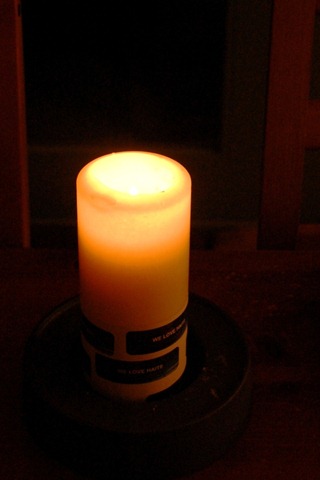 One year ago today, January 12, 2010, my sons’ birthmother died. We don’t know the details. We only know the words we were told: that when that catastrophic magnitude 7.0 earthquake ripped apart Haiti, demolishing much of Port au Prince, Kyle and Owen’s birthmother “didn’t make it.”

She was one of an estimated 230,000 people who died that day. We’ve all heard the numbers— three million Haitians affected; one million made homeless; 300,000 injured; 280,000 homes and buildings collapsed. Tent cities still brimming with countless people living the unthinkable. For those of us who are not on the ground in Haiti, these numbers seem surreal. Having been to Haiti to adopt Kyle and Owen, these numbers seem especially surreal… it is hard to imagine that place any more distraught and distressed than it had already been. The aftershocks of it ripple far and wide. And the numbers don’t do it justice.

Like most of the other parents of Haitian adoptees that we know, in the weeks that followed the earthquake I was glued to CNN, Facebook, and Twitter. Because of our connection to Haiti we were tied into a complex web of social networks that gave a glimpse of what was happening in Kyle and Owen’s birthplace. The pain and suffering witnessed, second-hand, was almost more than the soul could bear. And we were not even there. As a result of that, coupled with a fierce desire to protect the boys’ privacy, when I found out that their birthmother had died, I was adamant that we keep it to ourselves. It seemed wrong, on so many levels, to talk about it publicly (my worst fear was overly exposing our children, and the potential for our story to be sensationalized; at the time, news outlets were grasping for human interest stories with Haitian-Americans and adoptive families). And so, over and over and over again, I refused to comment to the media, refused to do interviews with radio and television shows, refused to be the focus of newspaper stories, and refused to write about the full scope of the truth of our family’s own aftershocks on our blog. I still believe in my heart that was the right thing to do. And yet, it did what so often happens with monstrous catastrophes—it kept the private shocks and aftershocks just that—private.

This summer, five months after we told Kyle and Owen that their birthmother had died in the earthquake, they told me –on our way to our annual Haitian Adoptive Families Reunion— that they wanted people to know their birthmother was in heaven. They also told me that they wanted me to tell people about it, not them. They didn’t want to carry the burden of explaining it, but they didn’t want to carry the burden of people not knowing either. And so, we took all cues from them, and slowly began telling our own Haiti Earthquake Story more openly.

It seems like a day ago, and at the same time like a decade ago, (but not one year ago), that I told Kyle and Owen that a massive earthquake had struck their island. Snuggled up with them, in the warmth of my bed, with the morning light streaming through the windows, it was one of those profound moments in life where –cliché but true— time seems to stand still. I can remember so vividly their huge brown eyes staring right into mine with a million questions on both sides, and yet it also feels like a blurry hazy semi-memory. I’m glad that I wrote about it on the blog (here), because otherwise I surely would have forgotten the details. It was only because Owen was so insistent in the days that followed that I finally gave in to his urging and decided to try to find out if he and Kyle’s birthmother was o.k.

I put the word out to a trusted source in Haiti, the director of Kyle and Owen’s orphanage, telling him that that we wanted to search. All that any of us knew was that she had been living in Cite Soleil, the same place where she had birthed, in inhumanely gruesome conditions, the unbelievably healthy infants that would become my twin boys. No complex computer systems humming, no official documentation of the dead, no funerals or even proper disposal of human bodies that once gave life to others, no justice. None of that, but an on-the-ground spreading-of-word that rivals none. And it did not take long for us to hear the news. In a strange twist of fate – just another in a long series of impossible-seeming experiences that have taken place in the past six years of parenting our sons – I received the email on my iPhone while we were in New York City celebrating our 5th Adoption Day. While Haiti was suffering to the depths of which I cannot even fathom, we were on our way to see The Lion King on Broadway. I remember reading the email: “She didn’t make it.” She had died in the earthquake. I remember the feeling in my chest, like I couldn’t get a breath. I remember whispering the news in Braydon’s ear, and I remember our eyes locking in, trying to grasp the full meaning of this aftershock on our lives.

Kyle and Owen are, as much as anyone can be at age six, at peace with their birthmother’s death. That is a gift for which we are eternally grateful. We took the time we needed to figure out how to best approach it with them; we told them in a way that conveyed dignity, faith, and ever-lasting love; we’ve processed it with them for the past year; and we’ve struggled with them, wrestling with what it all means, and working through the ripple effects of the aftershocks. But ultimately it is to Kyle and Owen’s credit, and theirs alone, that they’ve weathered yet another storm – this one an earth-shaking, ground-quaking, heart-stopping one. They have, once again, amazed us with their resiliency. While this resiliency never ceases to surprise me, there is also a part of me that thinks, “of course they have handled this so well, they are Haitian through and through“… they are part of a people-hood, a Diaspora, a heritage, a legacy of sheer brilliant stunning resiliency. If there could only be one word to describe the Haitian people, including my two sons, it would be resilient.

Sitting in our house, I am watching Kyle and Owen spin their globe on its axis, around and around, as fast as they can. In typical fashion, they are screaming out loud and jumping up and down as they do it, as if it is the most exciting thing in the world. With the landscape of the earth mapped out in bright colors, Haiti seems so close. And then I look outside the window, to our snow-covered yard, with its swing-set and sandbox and swimming-pool-closed-for-winter, and Haiti seems so far away.

A year later, my heart still aches for my sons, their family of origin, the island nation and people of their roots. A year later, thinking about that earthquake still results in a lump in my throat that makes it hard to swallow. Even as they play happily on the floor right now, just a few feet from me, racing remote-control cars, I never forget from where they have come.

For a family like ours, Haiti is never far from our thoughts or hearts. For us, it is impossible to not remember. We feel the aftershocks everyday. Not just from the earthquake, but from the entire history, trauma, tragedy, and resiliency that is Haiti. I rarely ask for much on this blog, but today I ask you, if you are reading, to please REMEMBER HAITI. And if you can, please HELP HAITI. There are so many ways you can give. If you are looking for a trustworthy organization to which to send a financial contribution of any amount, please consider Heartline, Real Hope for Haiti, or Meds & Food for Kids Haiti.